India Back To 8 Per Cent Growth In Few Years: Khurshid 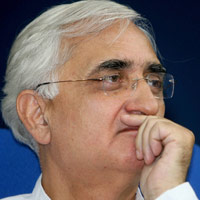 08 November, 2014
Print this article Font size -16+
The Indian economy is doing a lot better than the rest of the world, Indian External Affairs Minister Salman Khurshid said and expressed confidence that the growth rate would return to 7 or 8 per cent in a few years.

"We are quite confident of getting back to 7 or 8 per cent growth in a few years," Khurshid said, addressing an audience of academics, students and UK-based Indian entrepreneurs for the first-ever India Day at Oxford University.

"It is important to bear in mind that we are still doing a lot better than the rest of the world and one of the main reasons we hit this low range of 5 per cent after almost eight or nine years of 8 per cent is because of Europe, which slowed down so much that we couldn't really export and therefore we had to rely entirely on our own domestic consumption," he said at the event organised by the Network 18 Group.

"We had to control runaway inflation and have been forced to cut back with interest rates, etc., causing major slack as far as the manufacturing sector is concerned. But we expect this is something we will tide over in the next year or maybe two years and then it will be back to business as usual. The fundamentals of the Indian economy are strong and go far beyond the usual analysis patterns," he added.

In reference to the theme of the event, 'India A political economy for the 21st Century', the senior Congress MP described India as a "softly-softly" nation.

"Sometimes it is said that maybe India is not assertive enough. But a softly-softly approach leads to the desired change, without upheavals. We do not assert ourselves by intruding, dictating or imposing. It is an approach that has worked for us in the region (South Asia) and globally," said the minister, himself a former Oxford University graduate and lecturer in law at Trinity College.

"To some extent India's engagement with the world is also dictated by its culture. An important part of our foreign policy is that development partnerships come first. China is much more business-like; an ATM cash-in and leave. India has a longer haul approach," he added.
(PTI)