India Agrees To Some Chinese Demands To End Himalaya Standoff 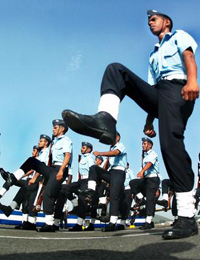 08 November, 2014
Print this article Font size -16+
India has agreed to a Chinese demand to demolish bunkers near their de facto border in the Himalayas, Indian military officials said, as part of a deal to end a standoff that threatened to scupper slowly improving relations.

Indian and Chinese soldiers faced off 100 metres (330 feet) apart on a plateau near the Karakoram mountain range, where they fought a war 50 years ago, for three weeks until they reached a deal on Sunday for both sides to withdrew.

The tension had threatened to overshadow a visit by the Indian foreign minister to Beijing on May 9. China's Premier Li Keqiang is expected to visit India later this month.

Details of the deal have not been made public but a senior official from the Indian army's northern command said India had agreed to abandon and destroy bunkers in the Chumar sector, further south along the disputed border.

"The bunkers in Chumar were dismantled after we acceded to Chinese demand in the last flag meeting. These bunkers were live-in bunkers," the army officer told Reuters on Tuesday.

India said up to 50 Chinese soldiers intruded into its territory on the western rim of the Himalayas on April 15. Some Indian officials and experts believed the incursion signalled Chinese concern about increased Indian activity in the area.

India said the Chinese soldiers were 19 km (12 miles) beyond the point it understands to be the border in the Ladakh region of Kashmir, a vaguely defined line called the Line of Actual Control, which neither side agrees on.

China denied it had crossed into Indian territory.

China won the border war they fought in 1962, which soured relations for decades, but ties between the Asian giants have been improving in recent years. China is India's top trade partner.

India has been beefing up its military presence for several years on the remote Ladakh plateau, building roads and runways to catch up with Chinese development across the border in a disputed area known as Aksai Chin

The decision to agree to the Chinese demand and demolish the bunkers followed heavy criticism of the Indian government over its handling of the incident by the opposition.

The Indian officer said earlier that Chinese officers demanded that India stop construction of bunkers, tunnels and huts along the Line of Actual Control, as the vaguely defined border in place since the 1962 war is known.

They also objected to nomads crossing from India to grazing meadows on the Chinese side, the Indian army officer said.

An official in India's Defence Ministry said on Monday the deal to end the standoff as a "quid pro quo" and said China had also demanded India take down listening and observation posts in the Chumar area, which is close to a Chinese road through Tibet.

It was not clear if India was dismantling those posts.