New Delhi [India], February 10 (ANI): Olympic gold medalist Jamaican sprinter Yohan Blake on Wednesday came out in support of India skipper Virat Kohli after a massive 227-run loss against England in the first Test of the four-match series.
On day five of the first Test, James Anderson and Jack Leach stole the show for England as they took seven wickets among themselves to bundle out the hosts for 192 in the second innings.
For Kohli, it was the fourth consecutive defeat he has led India to. The loss was also the first time India have lost a Test at home since 2017.
Blake said he loves Kohli's captaincy and his never complaining attitude and added that the right-handed batsman takes the blame for everything.
"Wonderful Test! I must say Joe Root well played. England well played, Jimmy Anderson was incredible as usual. They say you get better with the age, the age is just a number and Jimmy keep on showing that," Blake said in a video posted on his official Twitter account.
"What I really love about Team India is that Virat Kohli does not find any excuses. That is what I really love about his captaincy, he took the blame for everything. He said the bowlers did not find the right areas, the batsmen were not as consistent. He said 'we got to go back to the drawing board and come back'. And that is what I love about Virat Kohli and his captaincy," he added. 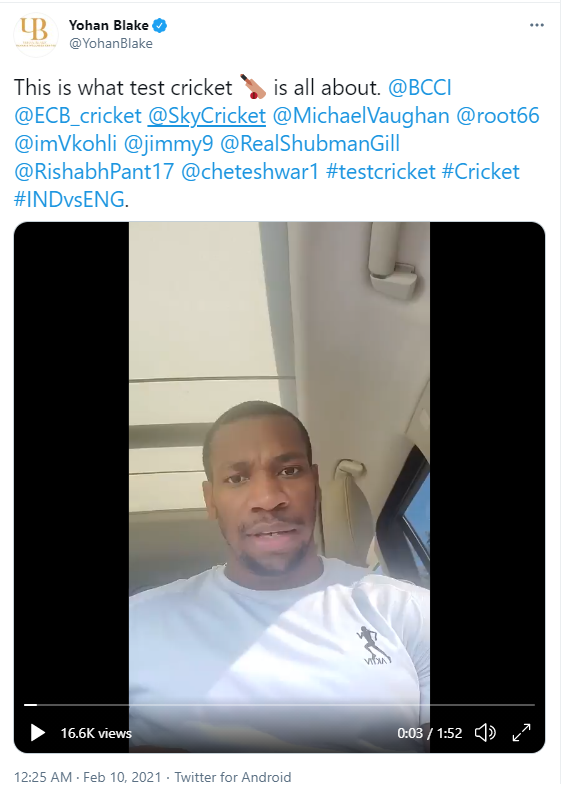 Jamaican sprinter further hailed Indian batters Shubman Gill, Rishabh Pant and Cheteshwar Pujara.
"And also, what stood out for me was Shubman Gill, he is a wonderful batsman. Of course, Rishabh Pant is excellent. Not every time he is going to put on a show but he's excellent for the game of Test cricket. That is why I love Test cricket, it mentally tests you and that is what Test cricket is all about. (Cheteshwar) Pujara in Australia showed that wonderful fight and that's what I love to see," Blake said.
Blake is keen to watch the second match of the series as according to him "Test cricket is absolutely the best" format of the game.
"Test cricket is absolutely the best. The second Test will be interesting, India was 1-0 down in Australia, they are 1-0 down at their home ground now. The second Test, I am looking forward to it," he added.
England's winning start against India in their ICC World Test Championship series has kept alive the visiting side's hopes of making the final of the nine-team competition. The victory at the MA Chidambaram Stadium in Chennai on Tuesday has lifted England to first place and 70.2 percentage points on the points table and they have improved their chances of securing one of the three series results in their favour that could see them through to the final - 3-1, 3-0 or 4-0.
The second Test of the series will start on Saturday in Chennai. (ANI)