Ind vs Aus: Siraj gets emotional while singing national anthem

Ind vs Aus: Siraj gets emotional while singing national anthem 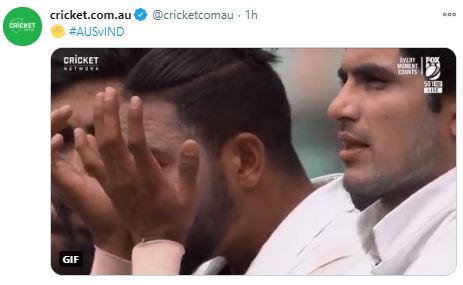 Asked to bowl first, India got off to a perfect start as Siraj dismissed David Warner (5) in the fourth over of the innings. Warner went for a drive, but he only managed to get an outside edge and a simple catch was given to Cheteshwar Pujara at first slip.
This is the first time in four years that Warner has been dismissed for less than 10 runs in a home Test.
With Australia's score at 21/1 in the eighth over, rain played spoilsport and the play had to be halted and as a result, early lunch was called. Will Pucovski (14*) and Marnus Labuschagne (2*) ensured that the side does not suffer from hiccups in the first session.
For India, Navdeep Saini is playing his first Test while Pucovski is playing his first Test for Australia.
India playing XI: Rohit Sharma, Shubman Gill, Cheteshwar Pujara, Ajinkya Rahane (c), Hanuma Vihari, Rishabh Pant, Ravindra Jadeja, Ravichandran Ashwin, Mohammad Siraj, Jasprit Bumrah, Navdeep Saini.
Australia playing XI: David Warner, Will Pucovski, Marnus Labuschagne, Steve Smith, Matthew Wade, Tim Paine (c), Cameron Green, Mitchell Starc, Pat Cummins, Nathan Lyon, Josh Hazlewood.
Siraj had made his debut in the Boxing Day Test against Australia and the pacer managed to impress one and all, as he went on to take five wickets in the Test match. (ANI)