New Delhi [India], December 21 (ANI): Former India opener Wasim Jaffer on Monday sent out a cryptic message for stand-in Test skipper Ajinkya Rahane ahead of the second match against Australia and he asked the fans to decode the message.
In a message on Twitter, Jaffer seemed to have posted a motivational quote, but when you have a closer look and just pickthe first letter from the different words, the cryptic message can be guessed as: "Pick Gill and Rahul". 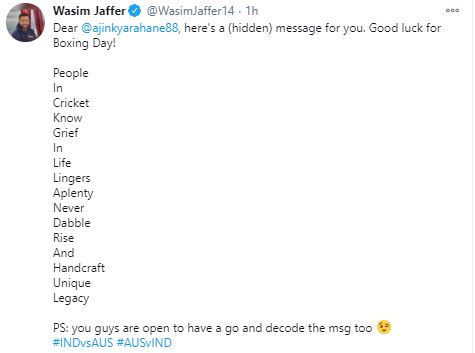 India stumbled to an eight-wicket loss in the first Test of the four-match series. On the third day of the first Test, India was bundled out for 36 in the second innings and Australia was given a mediocre target of 90 runs to go 1-0 ahead. Australia chased down the total comfortably inside 21 overs with eight wickets in hand.
The Kohli-led side might have had a 62-run lead entering the third day of the first Test, but the side squandered the advantage as the batsmen failed to rise to the occasion and Australia made light work of the visitors. While Josh Hazelwood scalped five wickets, Pat Cummins took four.
This score of 36 is India's lowest-ever score in Test cricket. Before this, India's lowest score was 42 in Test cricket against England in 1974.
In the first Test, India went in with Prithvi Shaw as an opening batsman ahead of Shubman Gill and KL Rahul. Shaw managed to score just four runs in the match and he was bowled in both the innings.
India and Australia will lock horns in the Boxing Day Test at the Melbourne Cricket Ground, beginning December 26. Skipper Virat Kohli would not be there for the visitors for the remaining three Tests as he heads back home after being granted paternity leave by the BCCI. (ANI)