Ind vs Aus, 4th Test: It is raining at Gabba, BCCI asks to 'not venture out'

Ind vs Aus, 4th Test: It is raining at Gabba, BCCI asks to 'not venture out'

Brisbane [Australia], January 16 (ANI): It is pouring heavily at The Gabba and taking a dig at the rain the Board of Control for Cricket in India (BCCI) advised spectators "to not venture out".
Just after the conclusion of the second session on day two in the fourth Test between Australia and India, the rain started heavily and covers were brought in. It is understood that the final session will get delayed due to the rain.
Taking to Twitter BCCI shared a video from the ground and captioned, "Do not venture out." 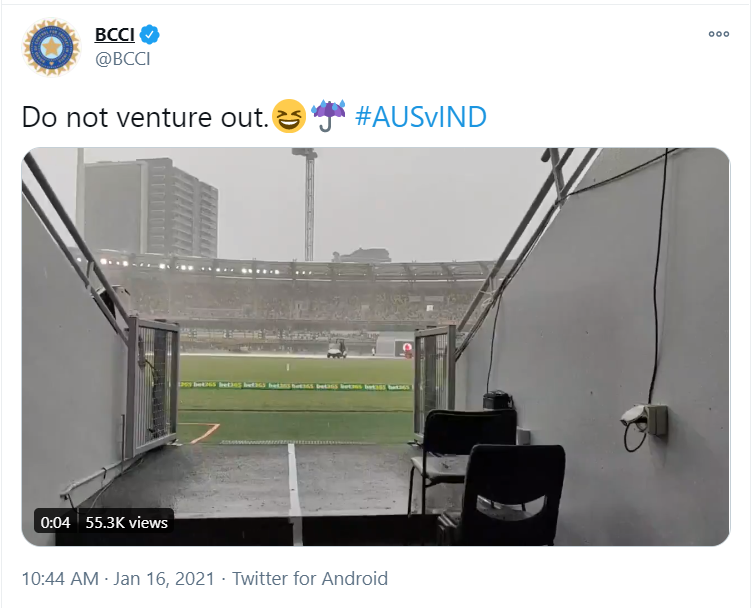 At the tea interval, India's score reads 62/2 and the visitors are still trailing the hosts by 307 runs. Pujara and Rahane are currently unbeaten on 8 and 2 respectively. In the second session, 62 runs were scored from 26 overs.
Shubman Gill and Rohit Sharma lost their wickets in the second session on day two, and now Cheteshwar Pujara and Ajinkya Rahane are tasked with ensuring that the visitors do not fall behind.
After bundling out Australia for 369, India got off to a bad start with the bat as the visitors lost the opening wicket of Shubman Gill (7) in the seventh over of the innings. Pujara then joined Rohit in the middle and the duo played cautiously against the Australian pace attack.
Pujara and Rohit formed a 49-run stand, but as soon as India started to look comfortable, Nathan Lyon dismissed Rohit (44), reducing India to 60/2. In the end, Pujara and Rahane ensured that the visitors did not lose more wickets before the tea interval.
Earlier in the first session, Shardul Thakur and Washington Sundar took six wickets among themselves as India bundled out Australia for 369. Marnus Labuschagne top-scored for Australia as he played a knock of 108 while for India, Thakur, Sundar, and Natarajan scalped three wickets each. The first session on day two saw 95 runs being scored from 28.2 overs.
On the first day of the fourth Test, Marnus Labuschagne had played a knock of 108 runs to give the hosts an upper edge in the match. (ANI)