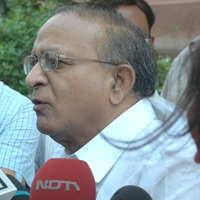 08 November, 2014
Print this article Font size -16+
India will have to raise the price of heavily subsidised fuels such as diesel, petroleum minister Jaipal Reddy said on 11 September, indicating that hikes could be announced within a week.
The finance and oil ministries have been lobbying hard for an increase in prices of fuel, warning the cabinet that time was running out to avert a fiscal disaster and a sovereign credit downgrade to junk by global rating agencies.
"However painful and difficult an increase in the prices of oil products may be, an increase is unavoidable," Reddy told reporters after meeting the finance minister. "To what extent can the consumers take it is another matter."
Reddy said the issue was unlikely to be decided on at a cabinet committee meeting later in the day, but the increase could come on Tuesday "or week from now."

Besides the Prime Minister and Chidambaram, the CCPA includes home minister Sushilkumar Shinde, defence minister A K Antony, NCP leader and aAgriculture minister Sharad Pawar, telecom minister Kabil Sibal and railway minister Mukul Roy.
Lowering the government's subsidy burden is key to improving India's fiscal outlook, while state-owned companies, which also help subsidise fuel prices, could see profit margins improve. Analysts say state-run oil marketing companies sell diesel at a loss of Rs 17 a litre, kerosene at Rs 32 a litre and domestic LPG at Rs 347 per cylinder.
The government, struggling with graft charges over allocation of coal blocks, has delayed the hike in fuel prices, fearing a strong backlash from its allies and opposition parties ahead of state elections later this year.
Ratings agencies Fitch and Standard & Poor's have warned that a widening deficit has put India at risk of becoming the first in the BRICs group to lose its investment grade. The others in the group are Brazil, Russia, China and South Africa.
Economic Affairs Secretary Arvind Mayaram said the government planned to take corrective steps to rein in the deficit, which private economists warn will reach 6 per cent of gross domestic product this fiscal year.
"Pain will be felt by everyone," he said.
Reddy said on 10 September he had circulated an updated version of a note detailing the crisis created by the rise in crude oil prices and fall in value of rupee against the US dollar to members of the CCPA.

"We had circulated a note to all members of CCPA about the problem of increasing under-recoveries (revenue loss on fuel sales)... the under-recoveries will exceed Rs 1.88 lakh crore (this fiscal)," he said. "And prices (are) going up further at the global level; rupee is not softening."

On his meeting with Chidambaram, Reddy said he had "routine interactions" on various proposals but declined to elaborate.

"We discussed the figures relating to under-recoveries," he added.

PSU oil firms are losing a record Rs 560 crore per day on the sale of regulated diesel and cooking fuels, and another Rs 16 crore a day on petrol.

They are losing about Rs 6 per litre on sale of petrol, a commodity which was freed from government control in June 2010 but whose rates haven't moved in tandem with the cost.

"I can't take decision (on raising prices) only on the basis of economic facts. We are operating in a political economy. We will have to take a balanced view," he said.