In The Eye Of The Storm 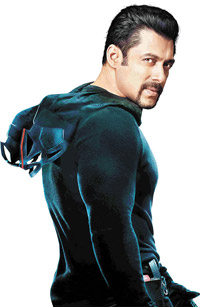 14 January, 2015
Print this article Font size -16+
Aamir Khan’s latest film pk has stirred up a row even as it sets records at the box office. Right-wing outfits vandalised theatres screening the film in many cities, alleging that it hurts Hindu sentiments. On Twitter, #BoycottPK fought it out with #WeSupportPK. BJP leader Subramanian Swamy claimed pk was funded by the underworld and ISI. Aamir defended the film saying: “We respect all religions... I don’t think any of us are talking about any one religion in particular.”

Real World Trouble
Tamil film actor Rajinikanth’s wife Lata Rajinikanth is in trouble. The Export-Import Bank of India has issued a possession notice against her for non-payment of Rs 22.21 crore that Mediaone Global Entertainment had taken on credit for producing the Rajinikanth-starrer Kochadaiiyaan, directed by daughter Soundarya R. Ashwin. Latha had signed on as the guarantor. The bank had issued a demand notice asking Mediaone to repay the amount with interest, liquidated damages and other costs within 60 days. When the payment was not made, the bank decided to take possession of the asset, a bungalow in Chennai.
Stick For Support
Bollywood star Salman Khan’s visit to Sri Lanka to campaign for incumbent President Mahinda Rajapaksa has drawn flak from political parties in Tamil Nadu. MDMK chief Vaiko called Salman a betrayer for supporting Rajapaksa, who was ruling Sri Lanka in 2009 when civilian casualties peaked in Tamil-dominated areas of the country during the fight between the army and the LTTE. Salman is the first Indian actor to be roped in for a poll campaign in that country.
Conduct Unbecoming?
Sun TV Network chief operating officer C. Praveen was arrested for allegedly sexually harassing a woman, who held a senior post in Surya TV, the Malayalam channel under the network. She quit her job five months ago. Police said she had furnished evidence, including voice and data recordings of conversations. The network remained mum on the development. Sun TV is owned by the Maran brothers — Kalanithi and Dayanidhi.

End Of  An Innings
M.S. Dhoni dropped a bombshell by retiring from Test cricket in the midst of India’s tour of Australia. Dhoni said he wanted to focus on ODIs and T20s. One of India’s most successful cricket captains and under whom India won the 2011 World Cup, his name allegedly figured in the Mudgal report on the spot-fixing scandal. Experts say his decision will not affect his brand value. As per 2014 figures, he endorses 20 brands, earning an average of Rs 13 crore per annum for each.
Sky Marshal
M. Sathiyavathy has become the first woman director-general of civil aviation. A 1982 batch IAS officer, she is currently additional secretary and financial advisor in the aviation ministry and has a clean image. Though she has been appointed as DG till 28 January 2017, she may hold the post for a few months only as she is set to be empanelled as secretary later this year. Her first challenge is to restore Indian aviation safety to its top ranking.

Close Shave
Hotelier Sant Singh Chatwal avoided a three-year jail term for running an illegal campaign funds scheme. Chatwal, an Indian-American businessman who has donated to Democrats, including likely 2016 US presidential candidate Hillary Clinton, was sentenced to three years of probation that includes 1,000 hours of community service and a fine of $500,000.
Fresh Brew
Sanjiv Sarin will take over as MD and CEO of Tata Coffee after the retirement of Hameed Huq, who holds the two posts at present. The board of directors at Tata Coffee approved Sarin’s appointment as CEO-designate. He is currently regional president for South Asia at Tata Global Beverages, the holding firm behind Tata Coffee.
(This story was published in BW | Businessworld Issue Dated 26-01-2015)
Tags assigned to this article:
magazine tata coffee aamir khan salman khan people in the news ms dhoni sant singh chatwal magazine 26 january 2015 m sathiyavathy lata rajinikanth c. praveen