In Pixel And Spirit 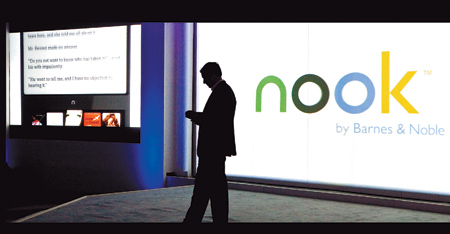 For avid shoppers in the US, the holiday season is the best time to buy some of life's essential supplies as well as some fancy gadgets. Many consumer device makers choose this period —November and December — to launch their most-anticipated products. This year, however, one of the coolest devices would also be one of the season's simplest — the e-reader, a device with just one function: to store and display e-books for reading.

There are a few e-readers already in the market, most notably from Sony and bookseller Amazon. Joining them this month is Nook, the e-reader from bookseller Barnes & Noble. Other companies preparing to launch dedicated e-readers include the Dutch firm Irex, the Taiwanese firm Asus, Korean giants LG and Samsung, and UK's Plastic Logic. The Amazon Kindle is already the largest-selling e-reader in the world. The e-reader is becoming so popular that technology research firm Forrester Research revised its sales forecast from 2 million to 3 million units this year, with 900,000 units selling during the holiday season. "This season, e-readers will be one category that is going to be a breakout success," says Sarah Rotman Epps, analyst at Forrester.

Forrester expects the sales of e-readers to double in the US next year, and reach 10 million by end-2010. When the price of e-readers drops, more avid readers are expected to buy the device. The e-reader is not expected to become a mass-market device such as the iPod, but it is still big enough to attract attention and drive change.

Getting More Visible
The e-reader may not shake up the market the way the netbook has done, but it is it still one of the devices to watch in the next two years. Current e-readers use displays from a Boston-based firm, E-Ink. This display is superior to liquid crystal displays (LCD) because it is easier to read, and does not require battery power to maintain. However, E-Ink is still in its early stages of evolution. Current displays, while better than LCDs, are no match to the conventional books. E-Ink is still not in colour. Several companies are experimenting with colour and video displays for e-readers, and they are expected in the market sometime towards the end of next year. Also being developed are flexible displays that could be rolled up like a newspaper. "We expect to launch Wi-Fi e-readers next year and colour e-readers by early 2011," says Kevin Hamilton, North America CEO of Irex.

Device makers are experimenting with other technologies as well. Asus is preparing to launch a device with a dual screen and colour display, much like a printed book. LG is developing a solar-powered e-reader. While all these are dedicated readers, Apple and Microsoft are developing book-sized tablets with multiple functions, an e-reader being one of them. Several industry observers expect Apple to change the game when it launches its tablet early next year.

That said, the price of the device is still too high for mass adoption. Forrester thinks the price has to drop below $100 for it to become a mass-market device. This might take some time as E-Ink technology is quite expensive, but alternative technologies are emerging as well. One of them is the Organic Light Emitting Diode (OLED), and the other is low-power LCD displays. Both combine video with text, but consume more power than E-Ink.

The e-reader market would never be as big as that of the MP3 player or iPod, but it has a big influence on publishing. E-books constitute a negligible fraction of the $430-billion publishing industry globally, and the next two years would change the equation considerably. They would also influence the newspaper and magazine industry, by providing a business model for their electronic versions. It is also generating startups developing technology for newspapers and magazines to deliver content in e-readers.

For example, Pressmart, a Hyderabad-based startup, funded by Draper Fischer Jurvetson and NEA-Indo US Ventures, has developed a business selling software to publish electronic versions of newspapers and magazines. Several US and European publications use such tools to deliver their products on Kindle or Sony e-reader. The Philadelphia Inquirer, for example, distributes electronic versions of the paper for only $2.25 a week, while the print copy costs $6.08 a week. Most new e-readers being launched would also include a virtual shopping mall where you could subscribe to popular newspapers and magazines.

A Colourful Future
This business is expected to take off when colour and flexible displays come to the market, not to speak of video, by allowing media firms to create more exciting and flexible content. "Electronic versions are more flexible," says Sanjiv Gupta, CEO of Pressmart. "For example, it is difficult for a publisher to hike production suddenly in print." Many e-readers are banking on propping up the beleaguered publishing industry while also getting a share of the revenues. Even Apple's Steve Jobs, who said people do not read any more, is working with top US media firms to publish content on the tablet.

Reading rates have increased in the US for the first time in two decades. The National Endowment of Arts found early this year that reading rates have increased 9 per cent among young adults (18-24), after declining by 20 per cent in the previous survey in 2002. America acquired 16 million new readers in 2008. Readers now constitute half of the US population. More significantly, 15 per cent of them read literature online, a proportion that will increase rapidly with e-books. Last week, Google announced that consumers could download e-books using its software in the first half of next year. So, the e-reader will launch several battles: between device makers such as Apple and Microsoft, and between booksellers such as Amazon, Barnes & Noble and aggregators such as Google.

There is an issue of compatibility still; your Amazon e-book cannot be read on a Barnes and Noble reader. Publishers are yet to agree on a common digital rights management (DRM) standard. "This is the most contentious issue in publishing now," says David Burleigh, director of marketing at OverDrive, a global e-books distributor based in New York. The issue goes beyond compatibility of devices. Readers who buy digital books may have to change their habits, as publishers are in no mood to let buyers transfer their copyright products to another device.

The next two years will be an inflection point for e-readers and the publishing industry, as large firms drive technology and new business models. "Our vision is to make every book produced in any language available to anybody in 60 seconds," says Amazon's senior vice-president Steve Kessel. It may take Amazon and others a while to achieve this goal, but the attempt would transform publishing as we know it.