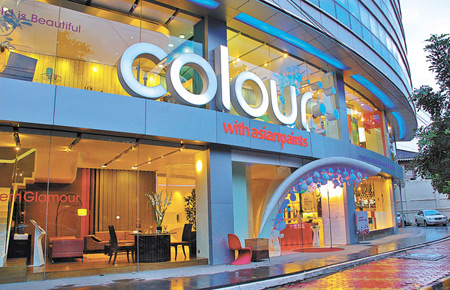 
However, the market situation is changing. For Asian Paints, handling the volume of growth will be the major issue. Also, margins are under threat due to high input costs and rupee depreciation. Further, global giants are warming up for a bigger slice of the pie.

The Leapfrog
In 1942, four friends — Champaklal H. Choksey, Chimanlal N. Choksi, Suryakant C. Dani and Arvind R. Vakil — founded Asian Paints by randomly picking up the name from a phone directory, and started manufacturing in a Mumbai garage. In its seven decades of existence, the last one was flamboyant for Asian Paints. Literally, it changed the looks of Indian houses. Both Murty and Anand led this revolution, giving consumers new options in shades and quality. "Colours were always part of Indians' subconscious mind, but campaigns of Asian Paints made them active," says the owner of a local paint company.

India's Rs 20,000-crore paint industry has been growing at a compounded annual rate of 15-16 per cent over the past five years, says Murty, while Asian Paints has grown faster than the industry at about 18 per cent. The shift from traditional, limestone-based, whitewashed walls to premium emulsions has changed Asian Paints' fortunes. In the past 10 years, its sales went up five and a half times, while profits rose seven times. It has 3,000 Colour World retail stores and saw market share rise from 45 to 50-52 per cent, notes Manoj Menon, senior analyst at Kotak Securities.

Today, the second generation of Asian Paints promoters is running the show with Murty and team. Some in the third generation, such as international operations head Jalaj Dani and IT and strategy chief Manish Choksi, are also part of Murty's transformation team. One of the first things Murty did in 2008 was to rejig the business into decorative, international and industrial units. "We did some introspection among ourselves and found these businesses were fundamentally different," says Murty. The international business was separated to look at more opportunities, he adds.

In fact, ‘Ask Aparna' was not the first of such experiments for Asian Paints. ‘Gattu', a cartoon kid created by R.K. Laxman in 1954 as the mascot, gained the company enough consumer attention. Still, it took 13 years to become the leader. In 1978, it built the first overseas plant in Fiji, and got listed on the Bombay Stock Exchange in 1982.

Ever since, the focus was to build more plants in India and add capacity. Though it formed a 50:50 tie-up with PPG Industries in the US in 1997 to make automotive coatings, it took two more years to make another buy. It acquired Delmege Paints in Sri Lanka and renamed it Asian Paints (Lanka).

The year 2002 was more eventful. Asian Paints unveiled a new identity. Mischievous Gattu stepped out and a new logo in red and golden yellow took the spot. The company bought Berger Paints and SCIB Chemicals in Egypt. When Murty took charge, Asian Paints was struggling to further growth and margins. In 2007-08, the profit was only Rs 428 crore on a revenue of Rs 4,404 crore. Murty and team almost doubled this in a few years. Last fiscal, Asian Paints posted revenues of Rs 7,706 crore with a profit of Rs 881 crore. The performance has made it an investors' pet; as on 21 December its market capitalisation stood at Rs 25,753 crore, much above many other giants.

Murty says the company improved its position in the market by leveraging its internal capabilities. He cites research as key to the success. Asian Paints has over 200 professionals in its research and development team, and developed own technologies for the main business, decorative paints.

break-page-break
"When I joined in 1971, we had a single plant at Bhandup, Maharashtra, with Rs 8 crore in turnover. To grow the top line and bottom line, we expanded," says Murty. "Later, we moved on to decor finishes, invested in modernising retail shops. We got the prime-mover advantage." Asian Paints today has a network of 30,000 direct dealers and several thousands of sub-dealers. The network is growing 10 per cent a year, according to Anand.

The Slips And Knee Jerks
Asian Paints operates in 17 countries with 24 plants. Its global operations form 13 per cent of the total group turnover. But its presence in major developed markets is almost nil. That is a missed opportunity, say experts, especially when it enjoys healthy finances.

But Murty says the US and Europe are mature markets with saturated growth, while India grew 15-16 per cent over the past five years. "We should go only to a market where we can deploy our capabilities and in India, opportunities are plenty," says Murty. Indian industry has been significantly modernised in the past decade and a half.

Moreover, according to Murty, developed and emerging economies differ in certain ways when it comes to painting homes. Western consumers prefer to paint their houses themselves, unlike their counterparts in India. Therefore, the product composition is slightly different here. In the US and western Europe, people buy paint from large chains, while in India, they go to small stores. Even then, manufacturing facilities in India match those in the developed world, says Murty.

Asian Paints' technology for decorative paints has been developed in-house. "We manufacture our own resins and intermediates. For industrial products and automotive segment, we have two joint ventures with PPG and use their technology," adds Murty.

Even though Asian Paints spread its geography outside India through small acquisitions, it faced some set backs. For instance, the acquisition of Berger International was not entirely profitable. Asian Paints had to dispose of a few Berger's loss making subsidiaries in Malta, Myanmar, China, Thailand and Malaysia and a minority holding arm in Philippines to turnaround the company's business.

The Indian paint giant was the target of a hostile takeover bid by British giant ICI in the late 1990s. This was after Kotak Mahindra bought 9.1 per cent in the firm from the fourth promoter Atul Choksey for ICI in 1997. The drama ended in November 1999 when the other promoters bought back 4.5 per cent from Kotak Mahindra, who had sold 4.6 per cent to Unit Trust of India.

break-page-break
Following the acquisition, promoters' share rose from 45 per cent to 52 per cent. Now there are three families in the promoter group. "It will be a tough job to continue cordial relations between the families in the next generations," says an analyst.

The Road Ahead
Decorative paints, including interior and exterior wall finishes, enamels, wood finishes and ancillary products constitute 72 per cent of the paint market in India. The decorative paint business of Asian Paints constitutes almost 70 per cent of revenues. But sharp increases in raw material costs troubled paint makers in the past few years, especially after the financial downturn. "In the fourth quarter of 2010-11, input costs increased by 6 per cent. Asian Paints hiked prices by 4.3 per cent from May 2011 and by another 2.4 per cent from June to neutralise rising input costs.

Even then, the demand has been robust. India's per person paint consumption now stands at 1.6 litre per annum from 1 litre 10 years ago. As this is still lower vis-a-vis the developed world, there is a huge potential for Indian paint makers to grow this up to 2.5 litre per annum, says Anand. That said, margins were under pressure during last fiscal and continue to be a concern, says Murty.

Anand spots three main growth drivers for the Indian market. First, the industry is growing at 1.2-2 times the GDP. Second, small towns are seeing huge growth. And the third and most important factor is aspiration, demand and knowledge of an increasing number of end customers with a rising disposable income. Asian Paints is all set to tap these drivers. It is investing more in upgrading over 3,000 retail outlets.

The company has 11 plants across the country, of which five — Sarigam in Gujarat, Sriperumbudur in Tamil Nadu, Baddi in Himachal Pradesh, Taloja in Maharashtra, Rohtak in Haryana — came up in the past 10 years. In April last year, Asian Paints' installed capacity in India stood close to 600,000 kilo litres and with a synthetic resins and polymer capacity of 50,000 million tonne. Now the company is increasing the installed capacity at the Rohtak Plant from 150,000 kl per annum to 200,000 kl per annum. It is also building India's largest plant at Khandala near Pune at an investment of Rs 1,000 crore. This will have an initial capacity of 300,000 kl per annum.

More importantly, rapid expansions and investments have not strained the balance sheet of Asian Paints. Expansions are funded by internal accruals and are not dependent on loans from banks. "We have a cash balance of Rs 700 crore, whereas net debt at current level is only Rs 175-200 crore," says CFO Jayesh Merchant.

Murty says the biggest challenge for Asian Paints in the coming years will be handling the size of business, manufacturing and logistics processes, along with meeting consumer aspirations and demand.

But Murty is confident. Asian Paints has travelled all the way to these heights by understanding the customer, he says. Anand is preparing for the competition ahead and is all set to emulate his predecessor's success. "His shoes are too big to fill, though," he admits.