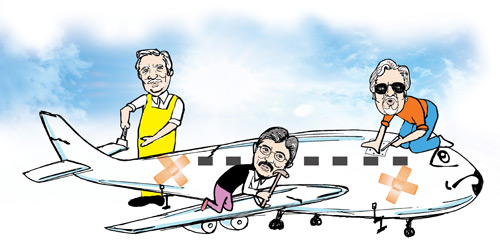 Two, the airline got two things right — its contracts, and cost structure and operations.

Bhatia's American partner Rakesh Gangwal  (who is said to have a share of the airline) negotiated well on IndiGo's behalf on the purchase price of bulk order aircraft (rumour has it that Bhatia got each aircraft $1-2 million cheaper than, say, KFA). IndiGo's contracts for maintenance and other supplies have also been expertly negotiated. The airline initially worked out leases in which the aircraft were returned and replaced with new ones as soon as they turned five years old. That itself meant lower expenses on spares and maintenance.

Bruce Ashby, IndiGo's former CEO, put in place well-tuned cost structures and operations. The airline's cost per ASK (available seat kilometre) was as low as Rs 2.2-2.5 in the earlier days. Industry sources say that even now it is not above Rs 3. IndiGo manages to make money despite high fuel taxes and fares that are sometimes below cost.

Also, the airline has not wavered from its basic model; it has "stuck to the knitting". "It is a perfect example of someone who knew his mind and knew how to go about getting what he wanted," says a former civil aviation secretary.

IndiGo has been planning a public issue, but has delayed it till it feels it can get the "best value". Bhatia is not in a hurry to tap the market because he does not need the money as of now.

Will Things Get Better?
And Bhatia is certainly the only player in the industry who can make that claim. Jet — despite trying for the past 5-6 years — has not managed to raise funds. But its auditors have asked the airline to somehow raise cash. Industry rumours are that Mukesh Ambani has in the past given cash at different times to Goyal to save the airline.

Air India is becoming a bottomless pit for the Indian government. Go Air has also been trying without success to raise funds for the past 3-4 years. "Unless the Indian environment changes, I do not see any investor putting in money in any airline in India," says Jet's Kardassis.

In fact, if the aviation sector's fundamental problems — unviable fares and high sales tax on ATF — are not resolved by the government, it is unlikely that many of the Indian players will make any money in the near future. And then too, it will only be those who have set their houses firmly in order. Aviation is undoubtedly a tough business.