In A State Of Limbo 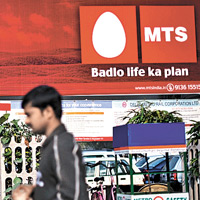 08 November, 2014
Print this article Font size -16+
Three mobile telecom service providers in India —Sistema Shyam TeleServices (SSTL), Telewings (owned by Norway’s Telenor) and Videocon Telecommunications —have their sights glued on 18 January, the day their licences will expire as per the Supreme Court’s (SC) order. While Telewings and Videocon bagged spectrum in six circles each in the November auctions, SSTL did not bid.
Both Telewings and Videocon have acquired spectrum in Bihar, Gujarat, UP East and UP West. Telewings also got spectrum in Andhra Pradesh and Maharashtra, while Videocon has Haryana and Madhya Pradesh.
So what happens now? The tide seems to have turned for SSTL. Within a couple of days of Russian President Vladimir Putin’s day-long visit to India, SSTL announced that it is in India for the long run. In an SMS to subscribers it said: “MTS (SSTL’s telecom brand)...intends to continue operations beyond January 18, 2013.” MTS, which had filed a curative petition against the judgment in the SC, is hopeful that its petition will be heard before 18 January.
Meanwhile, Telewings has written to the Department of Telecommunications asking to continue operations in Mumbai where it did not bid. It is a likely bidder for spectrum in Mumbai in the next auctions.
According to a recent Telecom Regulatory Authority of India notification, operators need to inform subscribers in circles where they do not have spectrum about discontinuing the service. While SSTL has said it will continue services, Telewings’ website has informed subscribers in 16 circles to shift to an operator of their choice by 18 January.