In A League Of His Own 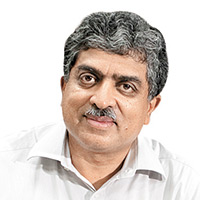 08 November, 2014
Print this article Font size -16+
With assets worth Rs 7,710 crore, as declared in his affidavit to the Election Commission, Bangalore South Congress candidate Nandan Nilekani has emerged the richest candidate contesting the 2014 LS polls.  The former chairman of the Unique Identification Authority of India and co-founder of IT giant Infosys, Nilekani said almost 80 per cent of his wealth is from Infosys shares. He owns 1.45 per cent and his wife Rohini 1.3 per cent in Infosys.

Gold Rush
Goldman Sachs Group’s chief executive officer Lloyd C. Blankfein got his biggest pay cheque in six years in 2013, receiving $23 million in salary and bonus. The compensation was up $2 million from the year before. He will get a further $6-million cash bonus if the company meets certain targets over the next three years. The long-term bonus was $5 million last year and $3 million in 2012 for the 59-year-old, who is the highest-paid CEO among peers at  top US banks for a second straight year.

End Of An Era
The old guard of US television is on its way out. First, David Letterman, host of late-night television shows for 34 years and the Late Show with David Letterman on CBS for 21 of those years, announced his retirment in 2015. He has earned 52 Emmy nominations so far and has his name up in neon lights outside the Ed Sullivan Theater in New York. The other television stalwart signing off was Barbara Walters — the woman who broke the glass ceiling of TV news. After 50 years in the business and 12 Emmys, she retires next month at the age of 84 as the host of The View.

Strip Show
The erstwhile ‘king of good times’, Vijay Mallya, now stands to lose his ‘Kingfisher’ brand as lenders have begun the process of selling trademarks associated with the grounded Kingfisher Airlines. The carrier, whose licence has been suspended, owes Rs 8,000 crore and banks are now looking to sell ‘Kingfisher’, ‘Fly The Good Times’ and ‘Flying Models’, among other brands, to make good their losses on account of the airline going belly up.

Rich Harvest
ajay piramal’s Piramal Enterprises sold its entire 10.97 per cent stake  in Vodafone India to Vodafone Group Plc for Rs 8,900 crore. It sold its shares for Rs 1,960 apiece, securing a gain of Rs 3,000 crore, or a 52 per cent return, in just two years. Piramal bought the stake at Rs 1,290 a share. Max Healthcare founder Analjit Singh too sold his 4.65 per cent stake for Rs 1,241 crore.

Not So Gay
Mozilla CEO Brendan Eich has stepped down after an online dating service — OkCupid — urged a boycott of the company’s browser because of a donation Eich made to opponents of gay marriage in 2008. He had donated $1,000 in support of California’s Proposition 8 campaign. The controversy over his views on same-sex marriage erupted when Eich, the creator of Javascript, was recently promoted on 24 March.

The Rising
Noel Naval Tata has been named chairman of Tata Group’s retail arm, Trent. The 57-year-old has succeeded F. K. Kavarana, who retired recently after turning 70. The largest single shareholder of Tata Sons, with 18.5 per cent equity, Noel was the vice-chairman of Trent and instrumental in bringing in British retail giant Tesco as a partner to invest in Indian retailing.

Going By The Rules
Nestle chairman Peter Brabeck has announced his retirement in 2017, in line with company rules that prevent board members from standing for re-election once they reach the age of 72. He turns 70 in November. Brabeck joined the Swiss food giant in 1968 as a salesman, and later became the CEO and chairman of the company in 1997 and 2005, respectively. He stepped down as CEO in 2008.