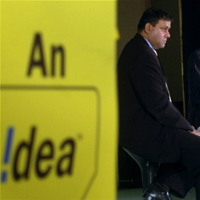 Analysts had expected Idea, part of the Aditya Birla conglomerate and nearly a fifth-owned by Malaysia's Axiata <AXIA.KL>, to earn Rs 629 crore, according to Thomson Reuters I/B/E/S.

Leading mobile carriers in India started gaining market share in 2013 and were able to raise prices of voice calls after a court order on a licensing scandal forced some smaller companies out of the market.

Unlike rival Bharti Airtel, which has other businesses, Idea is solely a mobile phone services company and only and operates within India, making it a preferred telecoms stock for some brokerages.

Monthly average revenue per user, an important metric to evaluate the health of telecoms carriers, rose 4.6 per cent on the previous quarter to Rs 181.Average realisation per minute, another key metric, rose to Re 0.45 from re 0.44 in the fourth quarter.

Idea also said that net debt had been cut by Rs 52.09 million to Rs 139.77 million in the quarter, adding that the reduction allows it to participate in a forthcoming spectrum auction. Idea, which has already bought airwaves for $1.75 billion from a state auction this year, needs to buy more in the next sale to renew its permits in nine service areas.