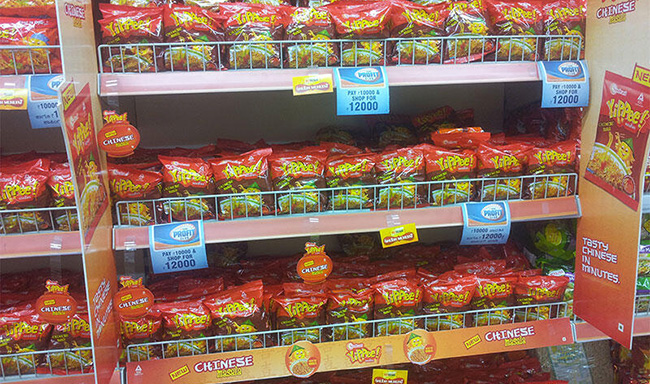 15 September, 2015
Print this article Font size -16+
FMCG major ITC's Sunfeast Yippee brand is eyeing to capture a market share of 20 per cent of the total noodle market space. At present, Yippee holds 16 per cent market share and is the second largest brand in the instant noodle market.
Nestle's Maggi — the country's most popular instant noodles brand — came under regulatory scanner after samples collected in some parts of Uttar Pradesh were tested in the lab and results showed that it contains high amount of monosodium glutamate (MSG) and lead. "We are targeting Maggi's market share vacated after the fiasco," said an ITC spokesperson.
The noodle brand has cashed in on the competitor's loss of market share conveniently by coming up with big advertisements and campaigns that claims that they are the safest to consume.
However, the company's campaigns crashed as Uttar Pradesh's Food Development Authority (UP FDA) came up with a report last month saying the samples of Yippee noodles, seized from a local mall in Aligarh, have been found to contain lead "far in excess to the permissible limit". .
The UP FDA tests came in the wake when few days back the company had been airing commercials about the safety of its instant noodles for the past few weeks. It has also invited consumers to visit its factories to see its production standards.
After the Maggi mess, the company had got hold of major share of the noodle market.
In order to ensure the consumers and stakeholders that it's product is safe, the company carried out tests of more than 700 samples of Sunfeast Yippee noodles, both internally and externally, at NABL-accredited and FSSAI-approved laboratories in India and laboratories in Italy, Singapore and Japan.
Yippee noodles and pasta coming under the scanner in UP has come days after the Gujarat government revoked a ban on the sale of these products after the company provided all data on the safety measures it takes in their production.

Nestle on the other hand has already lost money to the tune of Rs 320 crore in recalling and destroying its product from the market shelves. And it will not spend on R&D to introduce an alternative variant rather spend all their energies and resources on damage control after the brand took a hit in the wake of this controversy.
Maggi noodles contributes two thirds of sales in prepared dishes and cooking aids, which was the only category to demonstrate positive volume growth in CY14. The estimated sales value of Maggi noodles in the market is Rs 200 crore while related materials in the factories and distribution centres have an estimated value of Rs 1.10 crore, according to a recent filing with the exchange. Having been in India for over 100 years, Nestle India is present in 26 per cent of the total packaged foods industry.
Tags assigned to this article:
itc Yippee nestle maggi fmcg Noodle Market