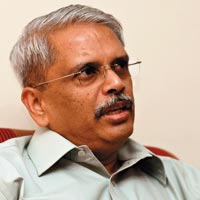 08 November, 2014
Print this article Font size -16+
Enthused by improving global economic scenario and a renewed wave of reforms back in India, IT giant Infosys says it is bullish over better growth prospects of IT sector in 2013 and expects greater job creation this year.

"I believe 2013 to be better than 2012 for IT sector as globally lots of uncertainties have been removed, US elections are over, Europe is not going to split and people believe that it is going to stay together," Infosys Co-founder and Executive Co-Chairman S Gopalakrishnan told PTI in Davos.

Kris, as he is known, is here for the Annual Meeting of the World Economic Forum along with the top executives of a host of other Indian IT firms such as TCS, Wipro, HCL and Mahidra Satyam-Tech Mahindra.

Kris said that a clearer picture would emerge after Infosys and other IT firms announce their full fiscal results for 2012-13.

About the broader economic scenario, Kris said, "Reforms that have happened in last few months have improved the sentiments, increased the confidence, and I except the growth to reach 7 per cent or more in 2013.

"It's actually a very positive thing and the reaction that I am getting from the foreign investment community and the business leaders here is that they want this to be continued and sustained and I am hoping that we will see more annoucements and more initiatives from the government and that will help us achieve a seven per cent growth and even more," he said.

S Gopalakrishnan, along with N R Narayana Murthy and five others, founded Infosys in 1981.

He has served as Director (Technical) and his initial responsibilities included the management of design, development, implementation, and support of information systems for clients in the consumer products industry in the US.

Before becoming the CEO and Managing Director in July 2007, Kris had served as the company's Chief Operating Officer, President and Joint Managing Director, responsible for customer services, technology, investments, and acquisitions. He took over as the Executive Co-Chairman on August 21, 2011.