IT Stocks Gain On Cognizant Results 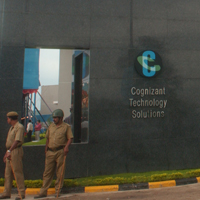 08 November, 2014
Print this article Font size -16+
The BSE Sensex fell 0.3 per cent, as investors continued to book profits after the recent rally to a record high. The Nifty was down 0.4 per cent.

Traders say markets will remain in a consolidation mode this week, but could resume their upward trend as foreign inflows are expected to remain strong until the US Federal Reserve starts to taper its monetary stimulus.

Metal and banking stocks lead the fall. Hindalco Industries was down 2.3 per cent, while Tata Steel fell 1.4 per cent, on profit-taking with both having risen for the last six trading sessions.

State Bank of India was down 2.6 per cent ahead of its earnings next week which is likely to set the tone for other state-run banks. Punjab National Bank was down 1.7 per cent.

However, ABB India gained 5.5 per cent after the power equipment maker and automation technology provider posted a surge in July-September earnings.

ABB's state-run rival Bharat Heavy Electricals was up 0.4 per cent ahead of its results due later in the day.