IT Firms Q2 Net Seen Up, Rupee Rise A Concern 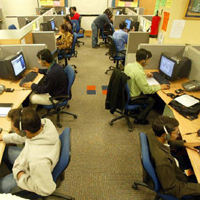 India's top IT services firms should report a rise in quarterly profits with new deals and the easing of downward pressure on fees, but a faltering dollar could squeeze margins in coming months for the export-driven companies.

The rupee leapt to its highest level in more than a year on Wednesday on increased foreign fund inflows, pulling down shares in software companies that get bulk of their revenue in dollars.

"The overall business sentiment has definitely improved for the IT companies and we are increasingly seeing positive vibes coming from the companies," said R.K. Gupta, a fund manager with Taurus Asset Management.

"But the stronger rupee does come as a worry and it could put pressure on revenue as well as profitability going ahead," said Gupta, who owns shares of sector giants Infosys Technologies and Wipro in the fund portfolio.

Rising competition from global players such as IBM <IBM.N>, Accenture <ACN.N> and Hewlett-Packard <HPQ.N> and new rivals from a wave of M&A in the global technology services sector were also a concern.

India's nearly $60 billion outsourcing sector had been bruised by the global economic downturn and financial sector turmoil, with clients putting the brakes on technology spending and demanding sharp cuts in prices for ongoing contracts.

Hopes of a revival in the business have risen in the last few months after major IT firms such as Tata Consultancy Services and Infosys Technologies <INFY.O> won some large deals and said that the demand for price cuts had reduced.

Infosys, which is seen as a trend setter for the sector, kicks off the results on Friday and the focus will be on its comments on demand and pricing environment, the technology budgets of clients and staff hiring.

Brokerage Kotak Securities said Infosys could forecast a flat to 1 per cent decline in dollar revenue for the fiscal year to March 2010, smaller than its July forecast for a drop of 3.1-4.6 per cent, on improved business outlook.

MarginS Watched
Analysts said while the worst could be over for the IT firms, a sharp growth revival in the near term was unlikely as sectors such as telecoms and manufacturing continue to witness subdued business sentiment though financial firms were seeing stability.

US rival Accenture posted a fall in quarterly profit last week and gave a weaker-than-expected outlook for the fiscal year that began in September, despite the growing view that corporate spending was recovering. [ID:nN01292907]

Chief Executive Bill Green said there was still some uncertainty, but business sentiment was improving.

"We expect the situation to continue to gradually improve going forward, even as the possibility of a major negative event such as a bankruptcy cannot be ruled out," analysts at brokerage Angel Broking wrote in a research report.

Tata Consultancy and Wipro should report healthy margins in July-September helped by stable prices and cost cuts, while Infosys should see a drop of about 60 basis points on increased investments on sales and marketing, ICICI Securities said.

Margins are expected to come under pressure in the quarters ahead after the rupee rose to its strongest since Sept. 26, 2008 on Wednesday, taking gains to 11.9 per cent against the dollar from its record low in early March.

Infosys, Wipro and Tata Consultancy are expanding in markets such as Europe and the Asia Pacific to cut their dependence on the U.S. market, which brings in more than half the sector's revenue but has been badly hit by economic and market turmoil.

Shares in Infosys, valued in the market at about $28 billion, rose 30 per cent in the September quarter and Tata Consultancy soared 59 per cent, compared with the 39 per cent advance in the sector index and 18 per cent in the main index.