IT Can Do It 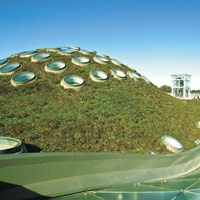 Sitting inside the historic golden gate park in San Francisco, the California Academy of Sciences is one of the more attractive buildings in the city. It was among the many buildings in the Bay Area damaged by the Loma Prieta earthquake in 1989. When the academy started rebuilding 10 years ago, the authorities took a decision that seems extraordinarily prescient with hindsight: the academy building was to be environment friendly to a level that seems as astounding as it is useful.

The building, opened last year, has the highest possible level of environmental certification, LEED Platinum, and is said to be the largest platinum rated public building, and the greenest museum in the world. "Working on the design of this building had a significant impact on my future work," says Gordon Chong, founder of Chong Partners Architecture, who served as executive architect working with internationally-known architect Renzo Piano, who designed the building. As the building inspires designers around the world, so do the methods employed to make it environment-friendly.

The building houses plants and animals used to different climatic conditions, and this made its design a complex task. The entire structure was modelled using advanced design software. Lighting engineers used simulations to decide on the placement of skylights so that each spot inside is optimally lit. Mechanical engineers modelled the air exchange required for the ventilation system. Electrical engineers ran simulations to make sure that the energy consumed by the building was 20 per cent less than the stringent requirements in California. Says Dawn Danby, sustainable design programme manager at design software maker Autodesk: "You can now use software to model the conditions around a building, and calculate its total energy requirements."

Reducing Carbon Footprint
Autodesk makes software that can analyse the environment impact and energy requirements of buildings minutely. Its office in San Francisco has a museum of sorts that showcases all the wonderful things software can do to improve the environment. You can calculate the environmental impact of products — chairs, shoes, aircraft engines, farm equipment — at the design stage itself, and also reduce it as much as possible. While this does impact the total carbon footprint of industries, green buildings make a substantial difference to the carbon emissions in the world. Buildings contribute to about 25 per cent of emissions globally, and 40 per cent in the US.

As we wait for the renewable energy industry to give us the perfect answer, information technology (IT) is doing its bit to introduce energy efficiency and reduce the carbon intensity of our lives. Software now let you make products taking into account their environmental impact. Virtualisation technologies reduce the need to use hardware, and thus help save energy in computing. Networks and sensors help you automate energy usage across enterprises, thus help reduce the carbon footprint. Smart grids help utilities regulate the flow of electricity. Says Inbar Lasser-Raab, senior director at Cisco's network systems: "IT consumes a small portion of the energy in the world, but the IT industry has a big influence on the world's energy consumption."

Cisco offers a product, EnergyWise that lets companies control their IT and communication equipment and other energy consumers in a building. For example, it automatically switches off lights when not needed, put laptops on battery mode, shifts unused phones to sleep mode, and so on. Cisco says that it could have an impact on 50 per cent of the energy consumption of a building. That would seem substantial, but the use of IT by the utilities could lead to an even larger saving. Popularly called as the smart grid, this automated electricity distribution system can have a substantial impact on global energy use and carbon emissions.

Technology On The Go
The electricity grid is one of humanity's greatest technological feats. But, like many other great achievements, it is also a technology that has hardly changed for a century. It consisted of a few elements: a source of power, a point of consumption, and wires to carry from the source to consumption. This structure remained till the 1990s, when the birth of IT began to change things a bit. IT companies realised that constant inputs from sensors in the network can change the way the grid is managed, but high costs and low bandwidths prevented massive adoption immediately. Now technology has truly developed to a stage where the grid is about to be transformed completely.

The fundamental problem with electricity grid is this: electricity consumption goes through peaks and lows, and there is no way to manage this at the moment except through load-shedding if the demand is too high. The smart grid can help utilities manage their distribution better by switching off high consumption devices remotely.

It could help utilities charge differential tariffs for consumption during peak and off-peak hours, and let enlightened consumers pay more for electricity from renewable sources. "A smart grid could ultimately realise our dream of achieving uniform loads through the day," says Reji Pillai, leader for energy and utility industry, IBM South Asia. His group is working with North Delhi Power Limited to implement smart grid technologies. Over the next few years, a large number of utilities worldwide are going to implement these technologies.

A smart grid is considered so essential in our fight against climate change that without it no renewable energy technology will work fully. Electricity is the most efficient form of energy. Simply by using electricity wherever possible can reduce global energy consumption significantly. For example, a study by two California professors, Mark Jacobson of Stanford and Mark Delucchi of University of California in Davis, found that the world can cut its energy needs by 2030 by 5.4 terawatts (about 30 per cent) just by using electricity wherever possible. They say that these needs can be met mostly by just three technologies: solar, wind and water. Another recent study by Pacific Northwest Research Laboratory in Oregon found that US electricity generation is enough to power 70 per cent of its cars, provided the grid was efficient.

Delucchi, a research scientist at the Institute of Transportation Studies at the University of California, thinks that most of the technologies required to cut emissions substantially already exist. "All the pieces of the system have been developed, what we need to do is to integrate them," he says. There is the question of high upfront costs of technologies like solar.

There is also the question of consumer behaviour. If you get a fuel-efficient car, you compensate the savings by driving more. It is sometimes called the rebound effect. "Rebound effect can be as high as 15-40 per cent depending on the technology," says Jayant Sathaye, senior scientist and leader, International Energy Studies group at the Lawrence Berkeley National Laboratory. "Consumer behaviour is a big issue, and the academic community has just begun to study it."