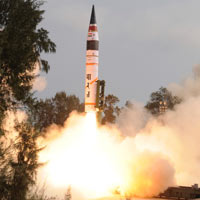 "There are very serious discussions taking place for both dedicated launches and for the co-passenger missions. At least three I am aware of where people are seriously interested and discussions are taking place", Radhakrishnan, also Secretary in the Department of Space and Chairman of Space Commission, said.

"They are expecting us to indicate whether we can do (the launches). So they want us to do it. When exactly they want it", he said.

"There (in Chitradurga) we are having about 540 acres of land. We are developing it into a complex for taking up R&D for the future", he said.

Noting that the proposed complex is going to be a "major asset", Radhakrishnan said ISRO is looking at the next few decades with this initiative. "The new generation has to look at what all they have to do".