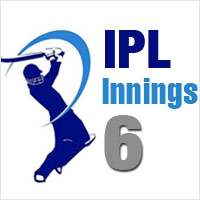 08 November, 2014
Print this article Font size -16+
At least three more players and one more IPL team is under the scanner for spot-fixing in the tournament, Delhi Police Commissioner Neeraj Kumar disclosed today.

This is in addition to S Sreesanth, Ankeet Chavan and Ajit Chandila of Rajasthan Royals who have been arrested by the police for alleged spot-fixing in three different matches.

"We are investigating role of another team and three more players. However, I cannot disclose the names as we are in the process of gathering evidence," Kumar told PTI here.

Asked whether police hoped to gather evidence against the players under its scanner as they would be extra cautious, the Commissioner said with a smile "may be, they have already committed the crime."

Asked what amount of money could be involved in the betting racket, Kumar said it was not possible to have any firm figure but it must be running into hundreds of crores of rupees.

"Look we are investigating and the chain of bookies and number of people involved in betting in a long chain. It is extremely difficult to ascertain this," he said.

The Commissioner said that the focus of the police was in completing the investigation into the present case as soon as possible and submit a charge sheet in 60 days.

"We will try to charge sheet the accused in 60 days so that they are not released on bail," he said.

Mumbai police has also got into the act and have seized laptop of Sreesanth, mobiles and other material. "We do not need any of the material seized by Mumbai Police so far but in case a need arises, they would be approached formally," the Police Commissioner said.

Asked whether Mumbai and Delhi Police were at loggerheads and a turf war was underway over the issue, Kumar said, "not at all. At some stage if there is a need for any collaboration, it will be done."

Kumar, who has investigated cases like 1993 Bombay blast case, American Center attack and subsequent deportation of Aftab Ansari from Gulf, Parliament attack case, Stock scam involving Ketan Parekh, said this case was more of a "pain and anguish for him as millions of countrymen were betrayed."

"The cricket players (arrested) have a remorse about what they have done," he said but added that questioning of bookies was a task similar to dealing with hardened economic offenders.

Asked whether the probe at any point was leading to any team management, Kumar said "there is nothing of that sort as of now."

To a question about the cooperation being sought by the Board of Control for Cricket in India (BCCI), the police Commissioner said, "We will be sharing our findings with them that can help them in their own probe and in deciding the future of the players."