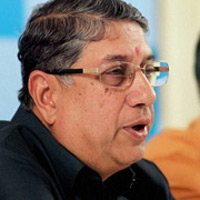 08 November, 2014
Print this article Font size -16+
A day after expressing his unwillingness to be IPL Chairman again, Union Minister Rajiv Shukla on Thursday refused to talk more than what he had already said on the raging spot-fixing scandal and the demand for resignation of BCCI President N Srinivasan.

"I have already spoken in detail about the entire thing on Wednesday...I have nothing to add to it," Shukla told reporters in response to a volley of questions on the subject.

Shukla landed in Patna this morning along with Union Corporate Affairs minister Sachin Pilot en route to Maharajganj to seek vote for Congress candidate Jitendra Swami in the by-election there.

While Shukla did not entertain any question on Srinivasan or the spot-fixing scandal, Pilot told reporters that a thorough inquiry should be done into the scandal so that the confidence of people on the game was regained.

"The spot fixing scandal has sullied the name of cricket and hurt the feeling of people who are fondly attached to the game...an inquiry has been ordered into the scandal and I am confident that it will hold thorough probe to regain confidence of people towards lovely game of cricket," Pilot said.