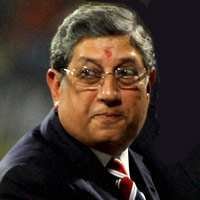 08 November, 2014
Print this article Font size -16+
A defiant BCCI President N Srinivasan on Saturday, 25 May rejected demands for his resignation in the wake of arrest of his son-in-law and CSK team owner Gurunath Meiyappan on charges of betting. Srinivasan is also the Vice Chairman of India Cements, which owns Chennai Super Kings.

"I have done no wrong, I have no intention to resign," Srinivasan said after landing in Mumbai.

"I wont be bulldozed. BCCI will follow all its rules strictly, law will take its course," Srinivasan told reporters outside Mumbai Airport.

Srinivasan flew from Kodaikanal to Mumbai via Madurai today.

A faction within the BCCI Board is planning to initiate suspension proceedings against Srinivasan if he refuses to step down in the aftermath of the IPL spot-fixing scandal that has thrown Indian cricket into disarray.
Read Also: IPL 6 Is More Sleaze Than Biz
Read Also: CSK's Gurunath Meiyappan Arrested

Srinivasan's son-in-law Gurunath Meiyappan, who was till recently referred to as Chennai Super Kings (CSK) CEO before being disowned by the franchise, was yesterday arrested for alleged involvement in betting.

The development has left Srinivasan cornered and there is a growing clamour for his removal from the top post. But the Tamil Nadu strongman has not given any indication of stepping down on his own despite the growing crisis.

Rattled by his continued defiance, some top Board officials have started the process to oust him by getting him suspended and using the services of his predecessor Shashank Manohar, who has a clean image.

According to a top BCCI official, Manohar has agreed to take up the position on an interim basis till elections are held for a new President.

When contacted, no BCCI official was willing to come on record on this development.

Srinivasan's term will end in September 2014 as per a new amendment in Board's Constitution, which provides for a 2+1 tenure for the President.

It is learnt that four top BCCI officials have already spoken to Manohar on this proposal.

"Manohar has agreed to be the interim President till all the problems are sorted out but he doesn't want to occupy the position for long. He would take it up only in a caretaker capacity," the top official said on condition of anonymity.

The top brass of the BCCI is getting in touch with the state units to start the process. As per the requirement, 2/3rd of the state units have to write a letter to the BCCI Secretary Sanjay Jagdale to convene an emergency meeting.

The special General Body Meeting will then have to pass a resolution with a 2/3rd majority to suspend Srinivasan and appoint an interim President.

Many of the top BCCI officials are already in Kolkata where the IPL final between the Chennai Super Kings and the Mumbai Indians is scheduled tomorrow.

"Since most of the top Board officials are gathering here for the IPL final, it will be easy to begin the consultation process," the official said.

The Board is particularly concerned about the credibility crisis the IPL has suffered because of the spot-fixing scandal, which led to the arrest of three cricketers, including India Test pacer S Sreesanth and a large number of bookies with underworld connections.

The Board officials feel that Gurunath's arrest has made Srinivasan's position untenable and his reluctance to step down has made it even more embarrassing.

CSK's Gurunath Meiyappan Arrested
Gurunath Meiyappan, son-in-law of Indian cricket board (BCCI) president N Srinivasan, was arrested after being quizzed for hours by Mumbai Police probing illegal betting on the Twenty20 league late on Friday, 24 May.

Former India test bowler Shanthakumaran Sreesanth and two other local cricketers were arrested last week on suspicion of taking money to concede a fixed number of runs and police have intensified investigations to discover the extent of the scandal.

"We have gone through questioning him in detail and after due deliberation, we've come to the conclusion that there is evidence of his involvement in this offence that we are investigating..." joint commissioner of Mumbai Police Himanshu Roy told reporters on Friday.

"... therefore he has been placed under arrest and will be produced in court within 24 hours as per the law."

Local media claimed Meiyappan was chief executive of the Chennai Super Kings but India Cements, the company that owns the franchise, said he was merely a member of team management.

Sreesanth has denied any role in spot-fixing.

The growing scale of the IPL spot-fixing scam notwithstanding, 26 May's final of the event would go ahead as per schedule and the embattled Chennai Super Kings would also continue to be a part of the league despite the arrest of its top official on allegations of betting.

The final, between Chennai Super Kings and the Mumbai Indians, will go ahead at the Eden Gardens, a top BCCI source told PTI.

CSK seem to be a team in turmoil after Gurunath Meiyappa, son-in-law of BCCI President N Srinivasan and the CEO of the side, was arrested by the Mumbai Police yesterday.

Asked whether CSK would face termination as per clause 12.3 (c) of the IPL contracts for team, the source said, "so far the allegations have not been proved in the court of law.

A person has to be found guilty, right now the Mumbai Police are interrogating him (Gurunath)."

The clause provides for termination if a franchisee, any franchisee group company and/or any owner acts in any way which adversely affects the reputation or standing of the league, the BCCI-IPL or the game of cricket.

India's film industry also got mixed up in the controversy when Mumbai Police arrested Bollywood actor Vindu Dara Singh on Tuesday for alleged links to a bookmaker.

The International Cricket Council (ICC) withdrew elite panel umpire Asad Rauf of Pakistan, who officiates in IPL, from next month's Champions Trophy on Thursday following media reports he was under investigation by Mumbai Police.

Legal sports betting in India is confined to horse racing.