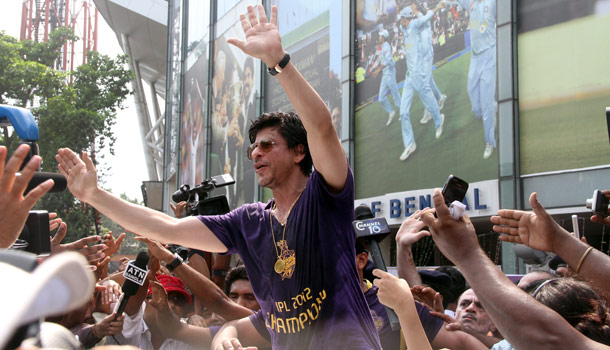 Kolkata Knight Riders co-owner and Bollywood superstar Shahrukh Khan has promised a "spectacular and never-seen-before" opening ceremony of the Indian Premier League 6 to be held at the Salt Lake stadium in Kolkata.

Before the start of the two-month long exhilarating cricket, the opening ceremony of IPL 6, described as the greatest show ever in India by the organisers, would stay true to its theme of 'cricketainment'.

"The opening nite of IPL 2013 will be a spectacular ceremony, the likes of which India has never seen before," Shahrukh said. "I will be performing to some of my songs. Katrina Kaif and Deepika Padukone, two of my co-stars, will also be there. Pitbull, the international rapper, will also thrill the audiences," he added.

PepsiCo’s Tryst With Fans
With Priyanka Chopra and Ranvir Kapoor shouting 'Oh Yes Abhi!" on the top of their voice, PepsiCo celebrates the modern face of cricket with a zing. PepsiCo has came up with several initiatives dedicated to the audience of sixth season of IPL that includes a limited edition of 500ml Pepsi Fan Can, activations with partner teams, 'Pepsi VIP Box’ where cricket fans may get to share space with their favourite celebrities.

On the social platform, fans will not only get to watch the matches but also play a parallel Pepsi Tweet20 tournament on Twitter. A new website will also be launched that will let the IPL fans participate in various contests that may fetch them match tickets, merchandise etc. "In our first year as the proud sponsors of the biggest annual cricket tournament, the Pepsi IPL, we are thrilled to add the extra fizz to fan experiences across mediums. For us this is a perfect platform as it provides wider reach and engagement opportunities with our core target audience in the peak beverage season." Says Deepika Warrier, VP - beverage marketing, PepsiCo India.

Twice-Wise
Amid all the buzz that IPL season 6 is garnering, for Rajasthan Royals, the good news was the fact that Valvoline Cummins, a lubricant brand, has extended its sponsorship for the second year in a row.

“We are delighted to be extending our association with the brand and look forward to helping them create ever-growing value and achieve the best possible exposure through the partnership,” says Raghu Iyer, CEO, Rajasthan Royals.

Sandeep Kalia, CEO, Valvoline Cummins also said that “their relationship with the brand during the last season has been very rewarding.”

Colours Of Holi Welcomes IPL 6
Buckets of flashy shaded water splashed on people with a a patriotic score in the background, the new TVC by Ogilvy Mather brings the thunder of IPL 6 immersed in the essence of Holi. With a tagline “Koi nahi bachega”, the TVC depicts the madness of people for the game along with the festival.

"Every summer India comes under the grip of IPL fever. The thrill, the excitement, the anticipation leaves no one untouched, whether you're a fan or not. This fun and mania is what we wanted to capture. IPL ke rang se koi nahin bach saka hai!!!" says Abhijit Avasthi, national creative director Ogilvy India.The background score has been composed by composer duo Ehsaan-Loy and the lyrics by Ila Arun. The campaign is produced by Corcoise Films and directed by Prasoon Pandey. It will be supported by radio and OOH.

Mobility Of TV On Mobiles
While viewers are upbeat about the sixth series of IPL 2013, associated publishers are leaving no stone unturned to reach out to viewers. DigiVive’s NexGTv, has bagged the official mobile streaming rights of Pepsi IPL 2013 from master rights holder Times Internet.

NexGTv users will be able to catch all the action right on their handsets and in addition to this, match repeats and highlights will also be available in the Video-on-Demand section. Pepsi IPL channel will be clubbed into existing subscription packs of nexGTv hence users can watch it by subscribing to these packs.

“When DigiVive had picked up rights to stream live T20 World Cup on nexGTv, huge traction and heavy traffic was witnessed and this cricket season is further expected to add on to the popularity of the service.” Says GD Singh, Director, DigiVive.

The service can be downloaded by sending a SMS mytv to 58888, or from any of the app stores and from the nexGTv website. It also offers Sony bouquet, Star bouquet, Aaj Tak, Asianet, Raj Channels etc