New Delhi [India], October 2 (ANI): Former Indian cricketer Virender Sehwag praised youngster Priyam Garg for his rescue knock against the Chennai Super King here at the Dubai International Stadium on Friday.
Priyam and Abhishek Sharma had rescued Sunrisers Hyderabad from a disastrous start and enabled SRH to post 164 runs in 20 overs. Priyam smashed 51 runs in just 26 balls while Abhishek made a gutsy 31 after witnessing a bad start.
Sehwag was left impressed by the stroke play of the two batsmen against the experienced CSK side. The former cricketer said that Priyam looks a very bright prospect for Indian cricket.
"Baghban feeling for Chennai. Under 19 guys smashing the senior guys. Priyam Garg looks a very bright prospect. Great tournament for the youngsters so far. #CSKvsSRH," Sehwag tweeted. 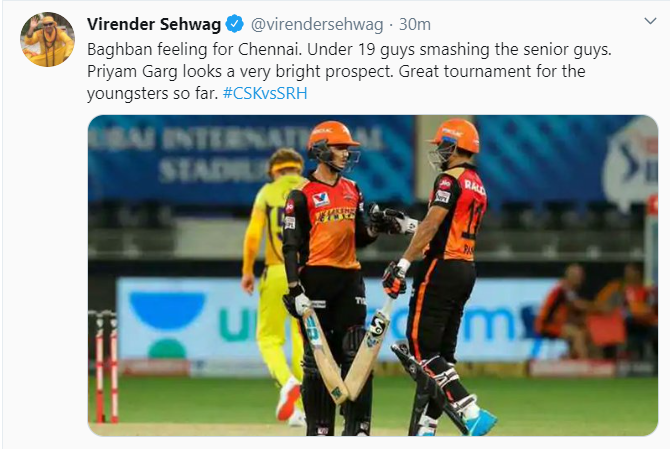 Earlier, after electing to bat first, SRH got off to a worst possible start with their opener Jonny Bairstow (O) back in the hut in the very first over.
Manish Pandey joined skipper David Warner in the middle. The skipper played sluggish innings with Manish scoring runs without playing any risky shot. Their 46 run partnership came to an end in the eight over after Manish hit a shot straight to Sam Curran at mid-off.
Warner departed three overs later when Faf du Plessis took an outstanding catch at the long-off and Piyush Chawal picked his first. Kane Williamson's run out on the very next ball added insult to the injury as SRH got reduced to 69/4.
Abhishek and Priyam then played cautiously in order to avoid any more hiccups. Abhishek and Priyam brought up a brilliant 50-run partnership as the duo rescued SRH from getting a paltry total.
Soon after this feat, the duo accelerated and started smashing boundaries. Meanwhile, Abhishek got dropped twice in the 18th over first by Ravindra Jadeja and then by Shardul.
However, Deepak Chahar ended Abhishek stint at the crease in the same over. Shardul bowled a tight last over giving away just seven runs as Hyderabad set a target of 165 for CSK. (ANI)