IOC To Cut Petrol Prices By A Rupee From 2 April 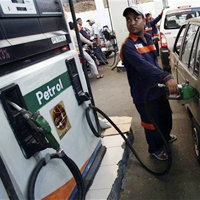 08 November, 2014
Print this article Font size -16+
Indian Oil Corp, the country's biggest refiner, will cut petrol prices by a rupee from Tuesday, 2 April 2013, as global prices of the fuel have declined and the rupee has marginally strengthened against the dollar, it said in a statement.

In January it allowed fuel retailers to raise the price of subsidised diesel by 50 paise a litre every month and asked bulk buyers to pay market rates.