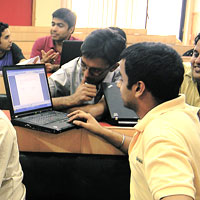 HRD Minister M M Pallam Raju said the the Group of Directors of IITs and Empowered Task Force had recommeded revision of fee and the revised rates will applicable to the new entrants to the undergraduate programmes.

The fee may revised periodically, he said.

After the 46th meeting of Council of IITs here, Raju said that at present, the undergraduate students pay an annual tuition fee of Rs 50,000.

The empowered task force had considered the details for implementation of the Kakodkar Committee which had recommended last year a steep hike of Rs 2-2.5 lakh per annum from the existing Rs 50,000.

The Group of Directors of IITs and Empowered Task Force had revised downwards the recommendations.

The IIT Council headed by the minister also decided to review the performance of all the institutes every five years by a panel comprising external academicians and industry leaders.

"No tuition fee is charged from the students belonging to Scheduled Castes and Scheduled Tribes. A number of other facilities like free mess, free hostel facility and free book bank facilities are available to SC and SC students," the Minister told reporters here.

Besides, 25 per cent of total students, whose parental income is less than Rs 4.5 lakh per year, are given 100 per cent scholarships, Raju said.

Members of Council of IITs stressed that easy loan facility is available to students and no student, who has qualified JEE, is denied entry into IITs due to financial constraints.

One of the key recommendations of the Kakodkar Committee was that IITs become financially independent of non-plan (operational) budgetary support to meet their operating expenditure, while the capital, students scholarships, support and infrastructure expenditure continue to be met fully under plan (capital budget support) by the government.