I have already given 25% of my wealth to charity: Premji 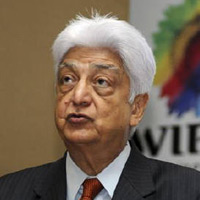 08 November, 2014
Print this article Font size -16+
Wipro Chairman Azim Premji said he has already given more than 25 per cent of his personal wealth to charity, but acknowledged it's not easy to use money well in philanthropy.

"I have very clear views on what I intend to give to charity and today more than 25 per cent (of my personal wealth) has already been given to charity," Premji told reporters in response to questions.

"...very often, it's more difficult to use money well in philanthropy than instituting money into philanthropy. We want to be sure that we continue to use it well and we don't continue to substitute the responsibility of government and that's very critical," he added

"We supplement and enhance what they (government) are doing and don't substitute what they are doing," said Premji, who is the first Indian to join the 'giving pledge' club, set up by Microsoft co-founder Bill Gates and billionaire invest Warren Buffett to encourage the world's wealthiest to donate at least half of their fortunes to charity.

Premji was asked if he has committed more than 50 per cent of his wealth vis-a-vis 'giving pledge' club, for which he said: "They (the club) have different forms of pledge for different countries."

He hastened to add that whether or not he would pledge 50 per cent of his wealth to charity is a "completely personal question".

The IT czar had donated 8.7 per cent from his personal stock-holding in Wipro for philanthropy in 2010. This had formed the endowment for the Azim Premji Foundation, a not-for-profit organisation set up in 2001.

Giving more to philanthropy, Premji in February this year had announced transfer of 295.5 million equity Wipro shares worth Rs 12,300 crore held by certain entities controlled by him to an irrevocable trust.