I Will Write My Own Book: Sonia Gandhi 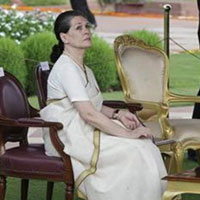 08 November, 2014
Print this article Font size -16+
With former External Affairs Minister Natwar Singh creating a row with his comments about Sonia Gandhi, the Congress President on Thursday (31 July) said that she will come out with her own book, which will reveal the "truth".

"I will write my own book and then you will come to know everything...the only way truth will come out is if I write...I am serious about it and I will be writing," she told reporters in Parliament House.

Gandhi was reacting to a question about the row triggered by the autobiography of Natwar Singh, which, he says, has given details about the reasons for her refusal to take up the Prime Minister's post in 2004.

Insisting that she was not hurt, Gandhi said that she had seen worse things like her husband Rajiv Gandhi being assassinated and her mother-in law Indira Gandhi riddled with bullets.

"I am far from getting hurt from these things. These things do not affect me," she said.

Singh had claimed that it was not Sonia's "inner voice" that prevented her from taking up the Prime Minister's post, as she had stated at that time but the opposition from her son Rahul Gandhi who was afraid she would be killed like his father and grand mother if she accepted the post.

Singh (83), an estranged Gandhi family friend, had quit the Congress in 2008 after he had to resign from the UPA-I Government in 2005 in the wake of the Iraqi food-for-oil scam.

The book titled "One Life is Not Enough: An Autobiography" is due to be released soon.

Singh also endorsed the claim of former Prime Minister Manmohan Singh's media adviser Sanjaya Baru that important government files were taken to Sonia by Pulok Chatterjee, who was in PMO, saying any question of protest over this did not arise as she was the "foremost" leader.

Congress had yesterday slammed Singh over the remarks alleging that they were aimed at shoring up the sales of his new book and wer politically motivated.