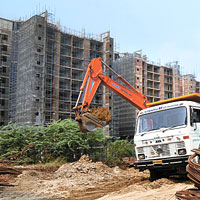 The three business houses, two of them engaged in real estate, have surrendered Rs 60 crore of undisclosed income after a search and seizure operation by IT department.

The IT department has also seized Rs one crore in cash and gold and diamond jewellery worth 1.5 crore in the operation launched on Wednesday on 35 premises of the businesses houses.

Several lockers have also been detected and would be opened, they said, adding that the raids were conducted in Jaipur city and Bagru area on the outskirts.