I Switched To Managing Daily 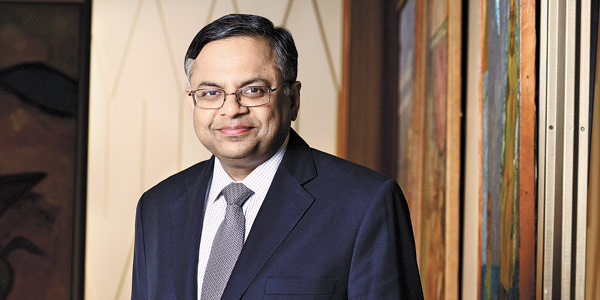 08 November, 2014
Print this article Font size -16+
Tata Consultancy Services (TCS), which was founded nearly a decade and a half before Infosys was born, has continued to be India’s largest IT services firm, hitting annual revenues of $10 billion in 2011-12. But while growth petered out for its nearest rivals Infosys and Wipro, and even for the fast-growing Cognizant Technologies, since the slowdown began in 2007-08, TCS continued to surprise investors, rivals and analysts alike, reporting a topline growth of 113 per cent. TCS managing director and CEO Natarajan Chandrasekaran attributes this to a new nimble-footed organisation structure that was, coincidentally, already being put in place in 2008 with 23 strategic independent units with complete charge of deal management, marketing and delivery. It’s a model that’s being replicated by all its rivals now. Excerpts of an interview:

As the CEO, what were you most worried about when the slowdown struck?
In 2008, when the (US banking) collapse happened, people were in a state of shock initially. Organisations were trying to understand what was happening, which essentially meant that there was a period of inaction. People could not take decisions. They had the money but they could not take decisions. In some organisations, people changed. For me, the first realisation was that something was happening and things were changing dramatically. And it was not uniform across companies. I needed to get down to understanding what was happening with every company (client). After a month or two, I almost switched to managing the business on a daily basis. Just a quarterly or monthly review was not good enough. We needed a lot more data points. It went on for almost a year. When things stabilised, I got back to normal.

What was put in place?
Different companies were going through different challenges. They were all responding differently. We needed to be relevant to each company. Being relevant to our customer was the primary thing that our team focused on.

TCS came out much better in that phase. What was the biggest initiative?
We stayed the course. We did not take any short-cuts. We tried to focus on each customer. The way we responded to each customer situation had to be unique. You could not take broadbased decisions. It so happened that though we did not do it because of the slowdown, our organisation structure changed around that time. We had rolled out a new structure in 2008 by which we created smaller, more responsive units. That automatically meant that we had a very nimble unit responsible for each customer. We leveraged this change very well.

For example, we did a deal with Citi. We had signed the term sheet before the collapse. Immediately after that, Lehman collapsed. And Citi was going through a difficult time. A lot of people thought if Citi goes down, we (TCS) would be in trouble. But we stayed the course. We continued to work with Citi. But Citi gave us tense moments.

What did you change or alter mid-way?
If you see our growth, it’s pretty secular. We have grown in all markets, in all verticals. In spite of the problems in financial services, we grew in it. We have realised that customers who are driving efficiency and growth, who are trying to implement systems and compliances... whatever they have to do, they are turning to technology. From our point of view, we have to be relevant in that context to our customer. Every place we did that, we did well. Where we didn’t, we didn’t do well. For example, in telecom our growth is low.

How do you rate this slowdown among those that you have seen?
I have never seen a slowdown bigger than this one. This is the worst. Also, when a slowdown happened earlier, our size was very small. In 2001, we were not even at a billion dollars. And we were not listed. You also have to be a certain size to feel the impact. Since we listed, this is the first slowdown.

How do you balance the growth-versus-profitability conundrum in a slowdown?
There is no formula. I believe it’s important to run the business profitably. Especially as our business requires us to make a lot of investments. Too many things are happening. There are lots of new technologies and they are hitting the market at a very rapid pace. We need to be investing and getting ahead of the curve in terms of capabilities and skill-set pools. I see the need for investments in R&D, innovation, business models, skill development and capability development. If at all, investments will be on the increase.

It’s very critical that we run the business profitably. Having said that, in a slowdown you also have to stay with the customer, and not lose marketshare. So on a case by case basis, you have to take a call. If it is strategic, you have to make the extra investment.

Anything that is commoditised, you have to treat differently. Specificity is very important. How you structure deals is also very important. Are you losing pricing and margins forever? Or, are you tactically losing it for a year? Those are questions that you need to pay attention to in each situation and then take a call. You do not want to create a business model that is not profitable forever.

From our point of view, there are 2-3 things you have to do. One, if the strategy is right, it’s very important to stay committed and stay the course in a slowdown. You can’t cut down. Second, you need to be more relevant to the customer and the market than ever before. It’s a relentless exercise. Third, continue to make investments.

What were the steps that you decided you will not take?
We didn’t do anything rash. We didn’t go for blind marketshare and worry about margins later. We had a calibrated approach in terms of where we wanted to be on margins and we stayed there. I didn’t cut any investments in any of the strategic programmes. We continued to take care of people. I didn’t lose any good people. If customers had a serious problem, we sat down and found a solution with customers. It was not a contractual approach.

What were the biggest learnings?
You need to create a resilient business model. If you are successful but don’t have a very resilient and well-distributed business model, you need to make sure you have one — in terms of portfolio, geographies, industries. You need a diverse — and very connected — business model. Second, you need to be grounded.
break-page-break
The management lesson is that you need to create belief in your team. The team gets the message from the market, from the media, that it is gloomy out there, that there is not going to be any growth. It is so important to keep the energy level of the company (high). We are a large company; if the energy level sags... You need to have belief, common vision and common purpose. It is very important in this kind of a situation. In finances, you have to optimise every day. It is important to run a healthy, frugal and optimised company.

What didn’t work, or was less effective?
One of the things I would have liked is to create the business model in emerging markets where growth is consistent. That’s still not there because we still have a lot of dependency on discretionary budgets. We are trying very hard to change that to have some definitive annuity revenues in addition to a portion of discretionary revenue. That transition has still not happened. At least 60-70 per cent should be annuity. In emerging markets today, it’s largely discretionary.

What were the specific initiatives in the transformational business model?
We scaled up our life and pensions platform from $100 million in revenues to $500 million in these past four years. We also launched our SMB business cloud.

How do you see the future from this quarter onwards?
We don’t give guidance. We have said that the customers are taking decisions. They are making discretionary spends. Europe is adopting technology more than before. We expect Europe to do well. Overall, we expect 2013-14 to be a better year than 2012-13.

Why are result-based contracts not dominant yet?
Their adoption will take time because it’s a business model change for the customer. They already have some investments. When they move to that model will depend on their readiness. In the insurance and financial services platform, the fact that we’ve gone from $100 million to $500 million clearly shows that adoption is happening.

When will the consulting dream of Indian IT firms come true? The revenues are still in low single digits. It will always be like that. We don’t include the SAS part of the contract. In pure-play consulting, it will always be low; whoever it is.

How do you plan to arrest the volatility in Indian business?
It’s slowly getting better in the past 2-3 quarters. We are trying more annuity contracts. It’s also about scale. If it increases, automatically these things will change. We have increased investment in India: in financial services and utilities. Also, large-scale system integration outsourcing contracts are coming up.

What’s the client sentiment like today?
Customers don’t talk about the macro as the reason for everything. Primarily because they understand the macro and (that) there is no overnight solution. Macro will recover slowly. The unemployment problem in the US is slowly going to get better.

In Europe, a number of decisions are being taken. It will slowly recover. So clients are very focused on whatever they do. Some are focused on efficiency, because they are very clear that whether or not growth comes, they have to deliver on profits. Everyone wants a growth agenda. They can’t keep taking out costs forever. They are locked in digital in a very big way. And they worry about compliance.

Which geographies are more positive?
That’s difficult to answer. No one geography is more positive. There are companies that are positive in a geography. Companies within a geography can be industry-positive or -negative. So it’s very company-specific. In sectors, financial services are not so positive. They have to adjust to a new cost structure. Retail and consumer product companies are going digital in a big way.

Are decisions being taken?
As far as customers are concerned, business is going on as usual—as it was before the slowdown. The way they operate is normal but they may not spend as much money as they spent earlier. But businesses are being run in a systematic fashion for the past six months.

How will the return of the captives affect third-party IT firms?
I don’t make too much of it. We have a model. No company goes 100 per cent captive. Every company that does captives, probably does it for specific reasons. Sometimes there may be some regulatory work they want to do in-house. Any time a company sets up a captive, it’s never a captive-alone strategy.
Also Read: Sales Is Vanity, Profit Is Sanity, Cash Is Reality
Also Read: I Invest In A Down Cycle
Also Read: There's No Such Thing As Cowboy Banking
Also Read: Don't Cut So Deep That You Cut Muscle