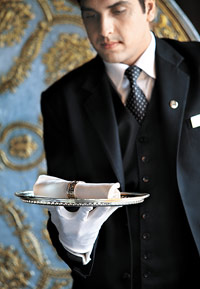 08 November, 2014
Print this article Font size -16+
When the 15-year-old daughter of a Delhi-based millionnaire saw the Richard Gere movie Hachiko, she fell in love with the dog. The teenager wanted nothing more than to have a similar dog as a pet. The doting father, an elite member of the luxury concierge service Quintessentially Lifestyle, called up his lifestyle manager Saurabh Singh and requested him to deliver two shiba inu pups.
“These pups are natives of Japan and are not available in India. We bought them in Tokyo, got all the necessary vaccinations and then imported them after getting all custom clearances,” says Singh. The whole process took a couple of weeks but the young girl had her puppies and Quintessentially another satisfied customer.
A Delhi-based CEO forgot his Cartier watch in the men’s washroom of Dubai airport. Not really having any hope of its recovery, he still called his account manager at Les Concierges, a Bangalore-headquartered concierge service with eight offices across the country, and requested them to trace the watch. “We contacted Dubai airport and were able to recover the watch in a few hours, which we then delivered to the client,” says Deepa M.P., vice-president of sales and marketing, Les Concierges Services.
Whether its tickets for the opening night of a Broadway show, front row seats at the Milan Fashion Week, a table at a Michelin-starred restaurant, a Birkin bag or something more bizarre like wanting to eat Amritsari kulcha at home prepared by cooks from Amritsar or having a private meal with masterchef Patricia Wells in her home, all you have to do is ask. For high-end luxury concierge services, no request is too big or small. “It’s like having your own Jeeves,” laughs Mishti Bose, group CEO of Quintessentially Lifestyle, a UK-headquartered luxury ‘members only’ concierge club that started India operations in 2010. Globally they have satisfied the whims of Madonna, J.K. Rowling, Paris Hilton and Jennifer Lopez, among others.
Of course, such service does not come cheap. Quintessentially has three types of membership — General (costs Rs 70,000 annually), Dedicated (Rs 1.65 lakh per annum) and Elite (Rs 7.20 lakh per annum). At Les Concierges, annual membership for Club Concierge (its uber-luxury division) varies between Rs 50,000 and Rs 5 lakh.
Then there are others such as American Express which offers a concierge service with its Platinum charge card. The card has an annual fee of Rs 50,000. “Our customers are all time-poor and money-rich and see value in these services,” says Shailesh Baidwan, CEO of American Express India. Adds Deepa: “A concierge programme pampers customers through tangible and intangible benefits. It gives them what is precious — time, convenience and luxury.”

And that certainly seems to be the case. A booming economy, increased affluence levels, globally aware consumers and more and more working women have increased the demand for personalised services. American Express Platinum charge card is seeing double-digit growth year on year. Though Quintessentially does not reveal the number of members, it says its members have doubled since last year, with 85 per cent being dedicated, 10 per cent elite  and less than 5 per cent general members. Les Concierges’ Club Concierge membership has nearly 3,000 members and it expects to grow by 200 per cent over the next financial year.
According to the World Wealth Report by Capgemini, India has 125,500 HNIs (those with over $1 million at their disposal) in 2011-12. And this number is likely to increase to 403,000 by 2015, according to Swiss wealth manager Julius Baer. And with people becoming richer and busier, the concierge business is set to grow. No wonder, Les Concierges attracted the attention of investors such as Rakesh Jhunjhunwala’s Rare Enterprises in early 2000 and private equity firm Acacia Redwood in 2007-08.
Jumping on the bandwagon are high-end real estate players who are offering concierge services as part of the package. Quintessentially has tied up with the Lodha Group’s World One Tower in Mumbai, DLF’s Magnolia in Gurgaon, three projects of Embassy in Bangalore and with Nitesh in Goa. Those purchasing these really expensive apartments will be given a one-year general membership for free. Les Concierges has also tied up with the Lodha Group for a few of their projects.
While these lifestyle concierge companies are a new phenomenon, five-star hotels have always had concierge desks. But even there, the bizarre requests seem to be on the rise. Satish Gaikward, chief concierge at the Taj Mahal Hotel, Mumbai, tells the tale of the ‘Princess and the Tuk Tuk’. A European princess who was a guest at the hotel took a fancy to an autorickshaw and wanted to purchase one. Her personal butler approached Gaikward who, in turn, went all over Mumbai looking for an auto on sale. A permit is required for the purchase of an auto and it cannot be bought off the shelf. Finally Gaikward contacted the marketing manager of Bajaj Auto in Pune and convinced him to sell an auto for private use to the princess.
So what does it take to be a good concierge? “You need to have passion, energy and an excitement to face new challenges. Another key characteristic of a good concierge is to be able to anticipate customer needs and preferences, cultural sensitivities and provide solutions which are the right match,” says Lakshya Narula, chief concierge at Taj Mahal Hotel, New Delhi.
Oh and of course, the concierge always serves with a smile, irrespective of how bizarre the demand.
smitatripathi(dot)bw(at)gmail(dot)com
(This story was published in Businessworld Issue Dated 24-09-2012)
Tags assigned to this article:
magazine more 4 dlf cartier smita tripathi lodha group hotels tribhuwan sharma ritesh sharma magazine 24 september 2012 luxury special 2012 concierge services concierge clubs taj mahal hotel quintessentially les concierges