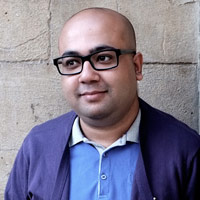 08 November, 2014
Print this article Font size -16+
Tell us a bit about yourself...
I grew up in a joint family full of lawyers in Gangtok, Sikkim. Discipline was the last thing at which we were trained growing up. Ours was a pretty unconventional upbringing – the parents encouraged us to argue with them, to fight with them. My undergraduate degree was in communication and graduate degree was in creative writing. I started writing my first book after quitting my job as an advertising executive at The Village Voice in New York and joined Oxford for my master’s because I had nothing to do. More recently, I taught a master class in fiction at Truman State University in Kirksville, Missouri, USA.

Why this book? How did the idea of writing these stories come to you?
It came from having nothing to do. I had travelled enough and knew I would have to do something. I didn’t want to return to Gangtok because then everyone would ask me what I was doing with my life, so I packed my bags to Manali, rented a small room in a guesthouse called the Raj Guesthouse and wrote my first story ('Let Sleeping Dogs Lie', the second story in the book) there. The idea to write stories based in various parts of the world where Nepali-speaking people live came about after the second or the third story.

Have you read Janice Pariat's Boats On Land?
I haven’t had the time to read much the past few weeks. I have heard wonderful things about the book and would like to pick it up the moment this craziness subsides.

Do you think authors through their stories, which are not completely fiction, have better clarity in bringing to fore political and cultural unrest in any region?
Often, yes, whether or not that is the writers’ intention. Case in point: I like to write character-led stories rather than issue-led ones. I will use other forms of writing to bring awareness of political and cultural struggles if need be but I write my fiction with the desire to tell a story and nothing else.

Click here to read the review of 'The Gurkha's Daughter'

How difficult was it to put the book together? Did you have to do any research at all?
It was a difficult book — a lot harder than the novel. I am one of those people who can’t write every day, so disciplining myself was tough. Some stories — such as 'The Gurkha’s Daughter' and 'No Land is Her Land' — entailed a great deal of research. For 'No Land is Her Land', I visited the Bhutanese refugee camps in Nepal and spoke to many, many people. I then went to Bhutan and interviewed a lot of people. The first draft of that story read like a piece of journalism! Others such as 'The Cleft' involved no research at all.
Tell us a bit about your writing habits. When and where do you write?
I can’t write every day. I have absolutely no discipline when it comes to writing. I write when I feel like it. By now I have been writing for pretty long to know that when the burst of inspiration strikes, I need to abandon all my social activities, isolate myself from the world and write. After three or four days of working like a maniac, the writing stops and I am back to doing nothing for days, weeks and months. It’s worked for me. I hope it continues working.

Where all did this book take you?
It often took me to my childhood. Sometimes to simpler times when life meant play, laughter and nothing more.

What’s your energy drink?
I have none actually. I tend to eat a lot when I write. Disgusting, I know.

What makes a book a really good read or a bestseller?
A bestseller, I wouldn’t know. I consider a book good if I want to read it again.

What's the hardest thing about being a writer?
I think staying grounded, especially when the reviews and sales are both encouraging, is difficult. All that adulation coming your way can go to your head. It’s hard not to believe all the great things being written about you. Other difficult aspects of a writer’s life could be making deadlines and trying to prove to your friends and family that just because you don’t have a desk job doesn’t mean you are free 24/7.

How did you find a publisher for your book? From manuscript to published format...
I found my agent by chance. I hadn’t even been looking for one when I attended the London Book Fair to let the interviewers at my Oxford interview know that I attended book fairs and was, you know, literary. At the LBF, thanks to the volcanic ashes in Iceland, half the stalls were empty. I sat next to a somewhat unhappy woman who was disappointed at the poor day she had just had. Almost all her meetings had gotten cancelled because of the ashes. We got talking, she informed me she was an agent, I handed her my story I had picked to read on the train, she took it and e-mailed me a few weeks later wanting more. The agent was Susan Yearwood of the Susan Yearwood Literary Agency. She signed me and circulated the manuscript among publishers in the UK. Once we saw that we could choose, we went with Quercus.

What are you reading now?
Nothing, to be honest. And writing? Yes, Facebook status updates. That’s it. I am in Shimla now, was in Delhi yesterday, in Gangtok the day before and will be in Delhi tomorrow and Kathmandu the day after. Then it’s Delhi, Aligarh, Guwahati and Shillong. Traveling reads glamorous only on Twitter.  One would think that the more I travel, the more I should read, but that’s not happened. There’s just too much going on. Phew.

So, what’s next?
The novel will be out at the same time next year. A few independent film companies in the UK have approached us about potentially adapting some of my stories into movies. It would be nice to throw my laptop away, move to a deserted island with a dozen books and do nothing but read for a few weeks.