I Invest In A Down Cycle 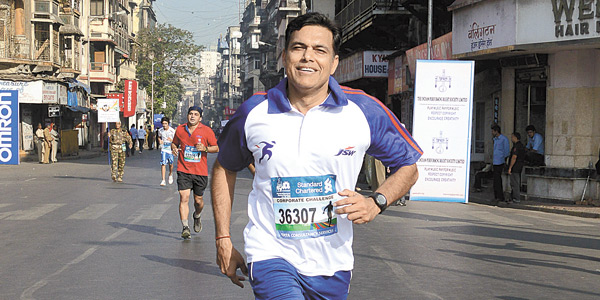 08 November, 2014
Print this article Font size -16+
The strategy of entering an expansion mode in the middle of the economic crisis of 2008 may appear irrational. But Sajjan Jindal, chairman of JSW Steel, says he has reason to expand in a trough. JSW’s Vijayanagar plant expanded to 10 million tonnes — India’s first — in FY12, right in the middle of the domestic economy slowing down to less than 6 per cent per annum. Global steel capacity utilisation had already slipped to 70-odd per cent. Just then JSW’s Vijayanagar plant was hit by a ban on mining in Karnataka’s Bellary. With capacity utilisation falling to a low of 30 per cent in September, JSW had to buy iron ore at e-auctions. Yet, its topline grew 172 per cent in the past four years (2012-13 Q3 turnover was up 33 per cent, net profit 129 per cent). Of course, acquisition of Ispat’s 3 million tonne plant at Dolvi, Maharashtra, helped. Excerpts of an interview on how he braved the slowdown.

How did you come to terms with the slowing economy? And what was your immediate instinct?
A leader must have complete clarity of thought. Leadership should be strong. I am an optimist by nature and by instinct. I see what opportunity there is for me in every situation, good or bad. I am quite convinced that whatever may be the situation, there is always an opportunity. I must look through the doors, windows, through the different layers of problems for that opportunity. Over the years, I have seen that this (approach) has been beneficial. My mantra is that I should be among the top 20 per cent in terms of the cost of production in the world. As long as cost is low and quality is good, I don’t have to worry about any slowdown.

What did you decide you must and must not do?
You must go back to basics and continue to focus on the business. Shed all the frills. Keep a positive attitude. Keep your mental balance. Use the opportunity to cut flab. A slowdown is an opportunity to clean your house. Not get perturbed. An up cycle will come.

Any strategic moves?
I have been following a very simple philosophy of investing during a down cycle and reaping benefits in an up cycle. After the 2008 down  cycle, we were in a phase of big investments which we completed by 2010. Now, every year we are growing at 30-35 per cent because of that. Also, we got an opportunity to acquire Ispat’s Dolvi unit. During a slowdown, we accelerate our investment cycle. We can negotiate cheaper contracts. Contractors are easy to find because other projects are not happening. And we are ready when the cycle is up. So we invest in a trough. Slowdown cycles used to last 5-7 years. Now, they are down to 2-3 years. We have seen this in the last 3 cycles, since 1997.

We must be very sure of our raw materials. Raw material integration is important. That is why the Bengal project is not moving fast. There is no surety or availability of iron ore. The laws are changing every day. Orissa, for example, has restricted inter-state movement of iron ore. Tomorrow, other states can follow. Bengal does not have iron ore. We are still struggling and asking Bengal to take up (the issue) with the Centre or go to court. No state should be deprived. After all, it’s one country. If Haryana and Punjab say we will not supply rice or wheat, and Orissa says we will not give iron ore, then we are living in a different world. We have the mining concessions in Jharkhand and we are getting other clearances.

We adopted the most efficient technology in blast furnaces, hot strip mill, cold rolling mill, steel melting shop and power plants. We brought in technology partners JFE (to provide technology for production of non-oriented electrical steel sheets at Vijayanagar) which is a leader in the world. We are very clear that we are the lowest project-cost builder.

This being a commodity business, what determines whether you can sell or not?
Pricing is determined by the market. You have no pricing power. So service plays a very important role. Quality too is important.

In such a situation, what is more important: capacity utilisation or profitability? You also have shareholder concerns...
Whatever investment we make, we are particular that the return-on-investment threshold is achieved. But growth is also a must. Both have to go hand in hand. Sometimes, a project does not show a high degree of profitability to start with. For example, right now, we are investing about a billion dollars in a cold rolling complex at Vijayanagar. However, it’s not that profitable. It’s a 5-6 year payback. But the advantage is that it puts JSW in the top league of global steel producers supplying to the automobile industry across the world.

Almost all predictions for this fiscal are far from positive. So how do you see the growth momentum up ahead?
The 2012-13 fiscal is probably the worst that I believe we are going to see. I am quite sure 2013-14 will be a better year. I see an up cycle.

What were the lessons learnt from the downturn?
You don’t make mistakes in a downturn. One tends to make mistakes in an upturn. You are euphoric and you think the world is going up, up and up. One learning is: don’t go overboard when everything is good. We invested a billion dollars in an acquisition in the US during an upturn. We are struggling even today. We are not the best-placed producer in the US. That went through in a momentum. Tata bought Corus in a momentum. You think you can contain costs, change management. They couldn’t do it. So in euphoric times you have to be very careful. Over a period of time, we have become a little conservative. We are not raising debt to any level. We don’t want to go beyond 1:1.

The global scenario is still bleak. Do you think even if India recovers, the global capacity utilisation, at 75-odd per cent, will get any better?
The global situation is not as optimistic as India’s. We produce 14 million tonnes; for us to export 20-25 per cent is not going to be a big deal, even in a bad export market. We have a long-term customer base.
When do you expect a resolution to the mining ban?
It’s happening, but slowly. That is not great news. It can be done at a faster pace. It should not affect the industry. We don’t have any mining assets of our own. This kind of slow progress or slow approval process is impacting us. We are operating at around 80 per cent capacity. We are using one of the poorest qualities of raw material to produce the best quality steel. But it’s very difficult. It’s not going to last forever.

Are iron ore purchases from e-auctions hurting profits?
E-auction prices are artificial. Especially, the base price. Like we saw in the spectrum auctions. The base price was kept so high that nobody bid. We can’t do that because even if the base price is kept high we are forced to take ore. Otherwise, our plants come to a standstill. E-auctions offer only one side of the price mechanism. The bids can only go up. Below the base price, there is no reverse auction which can give the real price.

Will you be bidding for mines in auctions?
We have been waiting for this for 10 years. There are a number of mines that are yet to be allotted to anybody (near Vijayanagar) which, as per the new mining policy, will be auctioned. We are eagerly awaiting that. Also, there are C-category mines to be auctioned. We are waiting.

But considering you do not have mines in Vijayanagar, why not expand at some other location?
In spite of not having the mines we are quite competitive. We are sure that one day we will get the mines. We have been waiting for a long time, but we are patient.

Auto steel is not really India’s forte. What is it you are bringing to the table with the JFE tie-up?
India makes close to 3 million vehicles. By 2015, it is estimated to touch 5 million. It would need 5 million tonnes of auto-grade steel, which is a very high-end steel. Not much of it is being produced today. We are building a 2.5 million tonne cold rolling complex which is purely meant for automobile requirements — outer panels, skin panels, the underbelly.

We will be working with auto companies to produce high strength steel so they can design new cars — reduce weight and make them more fuel efficient. We are working with JFE and car makers like Hyundai, Toyota and Ford in the domestic market. Auto companies that are importing from JFE will buy from us. Every auto company wants to buy steel from India because it’s cheaper.

As a CEO, what worries you most about the organisation now?
What worries me is the environment in the country. When the political leadership is unable to take decisions, we get stuck on small issues. Even if you take the metal sector, we have one of the world’s largest bauxite deposits and the largest coal deposits. These are the two raw materials you need to produce aluminium. We are producing just over a million tonnes of aluminium. We should be a country that produces more than 20 million tonnes and export it. We are stuck in small tribal and mining issues.

I don’t say we don’t take care of the tribals. We have to. But letting tribals remain tribals for their lifetime, for generations, is no solution. Let’s find a win-win solution. Getting stuck and doing nothing is not a great idea.