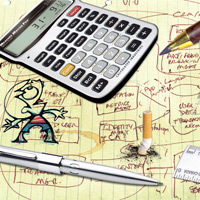 The universe of companies considered for the BW Real 500 ranking comprised 3,000 listed (on Bombay Stock Exchange and/or National Stock Exchange) and unlisted companies whose ‘annual audited' financial data were available with CMIE's Prowess database as on 5 October 2009. This year, for the first time, consolidated numbers were taken for companies that came out with consolidated profit and loss (P&L) accounts and balance sheets (combining their subsidiaries' and associates' numbers).

For companies with no subsidiaries, and for companies whose consolidated data were not available in CMIE's Prowess database but standalone results were available, standalone results were taken. Data used were for financial year 2009; for companies with FY ended 31 March 2009 or 30 June 2009, and FY08 for firms with FY ended Sept-08 or Dec-08. For companies that changed their FY, and had a fiscal year of more or less than 12 months, data has been annualised to 12 months. Each data was computed in Prowess using certain set definitions (explained below). For all stockmarket-related data and computations, NSE data were taken for companies listed on both BSE and NSE.

The rankings are based on the sum of total income and total assets. To eliminate differences in nature of manufacturing and services companies (manufacturing firms are asset-heavy, while services firms are income-heavy), two lists have been created for non-financial companies and financial service companies.

Return ratios (ROA, ROCE, RONW): Based on average assets, average capital employed and average net worth, respectively, to account for changes that have happened over time. The averages are computed for a two-year period.

Market cap: The product of the closing share price and the number of outstanding equity shares on 31 March 2009. P/E ratio: Calculated by dividing the closing price of a company's share as on 31 March 2009 by the EPS of the trailing four quarters. Shareholder returns: Includes benefits such as dividends, buy-backs, etc., and after adjusting share prices for stock splits, rights and bonuses.

EPS (earnings per share): As per the company's report on the NSE or the BSE as on 31 March 2009. 3-year EPS growth: Simple growth of EPS of FY09 over EPS of FY06, corresponding to the companies' respective financial reporting time frames, in per cent. Net profit margin: Net profit expressed as a percentage of total income.