How To Prevent Fraud 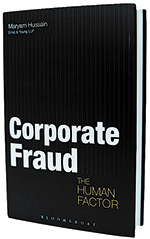 08 November, 2014
Print this article Font size -16+
Maryam Hussain’s book, in many ways,  supports a famous quote from Abraham Lincoln that ‘you can fool all the people some of the time, you can fool some people all of the time, but you cannot fool all the people all the time’.  Hussain leads the government and public sector investigations team with Ernst & Young. She has come up with a comprehensive book on corporate fraud. The book is extremely useful for CEOs and top-level management as it elucidates the spectre of fraud, its potential to devastate and what can possibly be done to detect and investigate financial wrongdoing. What is also meaningful is that the book covers several cases across the globe. Hussain takes the reader through the subject in a systematic and structured manner, the present and future scenarios of fraud.

On micro view, the book is certainly useful to understand what fraud risk is. And there are several matters which whet the reader’s appetite for more. For example, while discussing the problem with controls, the author very correctly states that the benefit of controls is limited in absence of an effective culture. An organisation can put every single possible control in place but if the management structure and business environment are not conducive, the formal controls have little impact. Thus, unless the management encourages good ethics, discipline, and a clean environment, fraud will happen in the best of controlled environments. This issue is true because fraud, in some form or the other, attacks millions of companies across the globe in spite of excellent security systems in place.
Two more elements that could have been discussed, particularly because the book refers to the human factor, are the placebo effect and the art of interviewing people during investigations. The placebo effect is whereby corporate management creates a psychological impact on potential fraudsters, though there isn’t any actually control or trap. For example, a house has a board outside which says ‘beware of dog’ could frighten a burglar even though actually there may not be a dog in the house. Similarly there could a board in a company office stating that ‘you are under surveillance’ even though actually there may not be any cameras. This placebo effect can be used in controlling the human factor in fraud control.

The second element, interviewing, is an art that is seldom taught in most courses or examination syllabi even though it is an integral part of any probe. Body language and human behaviour in different conditions have to be evidenced through interviews and interrogations. Detecting prevarications and falsehoods via interviews are matters that every investigator deals with.

Hussain’s work has excellent material if you look at it from an investigator’s, or even an auditor’s point of view. The description of digital forensic tools offers much help However,  the book does not provide significant value addition in terms of methods, techniques, and early warning bells. One of the features that makes any fraud related material interesting is the matter of early warning bells or ‘red flags’ as they are often referred to. They are clues, or rather, clues that don’t fit, which make any investigation interesting like a ‘whodunit’ book. Had some of these been included by the author from her rich experience, it would have added variety and colour to the book. .

The Satyam case is one of the major learning experiences in Indian corporate history. With respect to the large fraud cases referred to in the book, particularly Satyam, the author has given a very brief note.

The book conveys that with all the tools, techniques, methods, and advancements in digital forensics, fraud perpetrators will find it tough to carry on with their ‘chores’ in the days to come. However, one must bear in mind that an average perpetrator cannot be compared to an ordinary thief, dacoit or burglar. Those involved in financial crime have a greater IQ than petty thieves and can use advancements in technology to their advantage as well too. It is a situation where both sides are evenly matched, except that good always is stronger than evil.