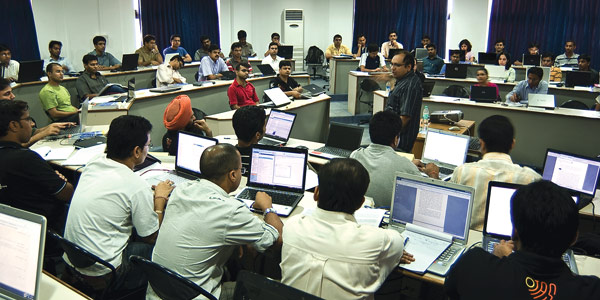 Father E. Abraham, S.J., Director, XLRI
We welcome the Finance Minister's proposal to easen and simplify norms to facilitate higher education loans for higher studies. This is a step in the right direction as it will encourage students to dream and aspire to take up professional programs. The proposal to set up 5 new IIMs and 5 more IITs will definitely bolster the professional education ecosystem in the country and also help the respective states in their economic progress. It is heartening to note that the government will be spending around Rs.28, 000 crores for sanitation in primary schools. The state of sanitation and hygiene in many of our primary schools is quite below par and definitely needs a lot of improvement.  The proposal to establish Rs.10,000 crore fund for encouraging entrepreneurship in the MSME sector is a bold move and will certainly encourage youth to take greater risk and undertake new ventures and thereby cater to needs of underserved sections of society.

Rituparna Chakraborty, Co-Founder & Senior Vice President, TeamLease & President, Indian Staffing Federation
Government proposal of setting up 100 smart cities with spend of Rs 7060 crores if executed shall bridge the dilemma of whether one should take people to jobs or jobs to people and rationalise wage disparities. India definitely doesn't need for engineers or MBAs and hence was disappointed that there was no mention of having more vocational universities and community colleges across the country. Average Indian kids need formal vocational training to make a livelihood rather than more of the elitist IIMs and IITs which fewer can get it. Farm to non-farm transition can't happen through IIMs and IITs. There was some redemption to that hearing the clear intent behind amending the Apprenticeship ACT. Transformation of Employment Exchange to Career Centers was much needed but its success would lie in building an efficient nationwide matching technology platform. Emphasis on infrastructure and manufacturing is the key but would fall short of expectation if it isn't backed by clarity around labour reform.

Prof (Dr) Atmanand, Dean, MDI, Gurgaon & Independent Director, SAIL
Long term growth and investment oriented budget- A vision for new India The budget is growth and investment oriented with three pronged approach based on containing inflation through better fiscal management particularly on expenditure side. It stresses on building new vision for India through development of social and economic infrastructure in all economic sectors and rural infrastructure development has been emphasized more. The education and skill creation has been clubbed together for readying for future India. PPP model has been envisaged for financing infrastructure project for which banks and financial institutions will extend cheap loans. The emphasis is also been laid on energy security which is essential for economic as well as strategic development. The connectivity between cities as well as rural centers is also given quite an importance. However, the steps taken for attracting FDI may not produce desired results due to not much clarity about the retrospective taxation and transfer pricing issues. More is needed on this front. Revenue targets are reasonable

Shantanu Prakash, CMD, Educomp Solutions Ltd.
The Skill India programme is an encouraging signal indicating priority for a much needed thrust in this area. We also congratulate the Finance Minister for making a strong pitch for online education to bypass the limitations of access to schools. It is expected that both these thrust areas will receive incremental allocations in the budgets to follow and that these small beginnings in these critical areas will convert to a long term policy with budgetary allocations to match.

Ranjan Kaul, Managing Director, Oxford University Press India
It is hearting to see the priority accorded to the Education sector, especially the focus around primary education. The government has at the same time committed to promote research and higher education in a big way through budgetary allocation and setting up of more IIT's and IIM's - this provides a much needed impetus to these twin areas that have remained largely stagnant over the past couple of years.

Pavan Chauhan, MD and Co-Founder - Meritnation.com
The government's decision to focus on setting up more institutes for technical & professional education such as AIIMs, IIMs and IITs is an extremely positive step. We have a huge population and scaling successful models like IITs is critical to bring quality education to more & more people.

This budget also shows that the government is taking decisive steps towards digitization & use of technology in education and beyond through its initiatives like paperless railways & e-governance. The Rs 100 crore allotted towards virtual classrooms is really heartening. Over the years it has been apparent that we do not have the requisite number or quality of teachers needed to educate our ever growing population. A lack of education coupled with low employability skills might make us lose out on our biggest opportunity, the demographic dividend. With virtual classrooms we believe quality education can be imparted to students who previously never had access to quality teachers.

While we build the virtual classrooms it is important to train our teachers who will become the mentors of tomorrow. In this light the Rs 500 crore allocation for a teacher training fund is extremely positive. We are also happy that the FM is focusing on inclusivity of education. The "Beti bachao beti padhao" scheme will help make education more accessible to women. As someone once said, “If you educate a woman you educate an entire nation.

T. Muralidharan, Chairman & Managing Director, TMI e2E Academy
Over all the budget has a few plusses and few minuses as far as skill sector is concerned. The big plusses are the clear plan to redesign the MGNREGA to create assets especially in agriculture which is the first step in preventing the misuse, which has been rampant till date. Unfortunately the demand of experts to include the Skill development training as a MGNREGA outcome has not been met. The second big plus of the budget is on the Apprentice scheme revamp promised by the Finance Minister and expansion of the scheme to MSME.

The budget did not spell out any special incentive for employment creation. The focus seems to be on Skilling and on ramping up the manufacturing and infra industry through investments. Skilling increases supply of manpower. If the demand is not there, this effort will be counterproductive. The excess supply will impact the compensation and keep it artificially low, which is already happening as per a recent study done by a team of researchers from Tata Institute of Social Sciences and TMI.

Ashish Dhawan, Founder and CEO, Central Square Foundation
The Union Budget announced today reflects the government's commitment to drive policy reforms in education focused on improving quality. We appreciate that the government has maintained a commitment to the important issue of education.

Most significantly, the government has announced strategic interventions for school education that will have a direct impact on improving student learning. These include the School Assessment Programme (INR 50 crores), Madan Mohan Malviya New Teachers Training Programme (INR 500 crore) and setting up virtual classrooms under the Communication Linked Interface for Cultivating Knowledge (CLICK) (INR 100 crore). Explicit allocation of resources in these areas indicates a shift towards an outcomes-based policy direction. We are hopeful that investment in these areas will only increase over the next 5 years.

The increased allocation for secondary education and the Skill India programme are encouraging steps to meeting the needs of large number of young people who are coming through our primary school system without a clear path beyond.  Our secondary education should activate vocational tracks to address the challenge of high drop-out rates.

It is also praiseworthy that the government has committed to scaling up and expeditious implementation of apex institutions such as IITs, IIMs, and AIIMS.

While our government has dedicated resources to school and higher education, it is imperative to ensure that the central budgetary allocation to states is optimally used. To achieve this, the Centre should include a performance based component in its allocations to states that would be contingent upon implementation of education policies and lead to greater accountability and performance levels.

Lakshmi Iyer - Director and Head of Education at Sannam S4 Consulting
We all know education and job creation are big on PM Narendra Modi’s agenda. And Finance Minister, Arun Jaitley’s maiden budget speech had a number of sound bytes for avid observers of the education sector. Having said that, the budget seemed like a statement with a list of promises drawing on what was put out on the BJP manifesto. Case in point new IITs/IIMs, we already have 13 IITs and 16 IIMs and there is a caste system that exists between the older established ones and the newer ones added in the last decade. The Finance Minister has set aside INR 500 Cr for 5 new IITs and 5 new IIMs. We know the existing IITs and IIMs have problems that need fixing from filling faculty vacancies, adequate facilities for students and upping their game with respect to research output and competing on a global platform. Capacity building is not about buildings and labs, it is about teachers, quality, good value education and I wonder if we are going to continue making announcements of adding more without getting down to the business of stemming the rot in education.”

The budget announcement on setting up Biotech clusters in Faridabad and Bangalore is promising and shows that the Government of India understands that India needs to get its act together in STEM areas. We need more Biocons coming out of this country. This initiative will hopefully give impetus to building world class science and engineering colleges in Faridabad which can offer a captive talent pool to the cluster. Till now science and engineering excellence have come from South India, hopefully this move by the Government will help India create new talent pools.

With a Prime Minister at its helm who harnessed the power of social media to run a campaign to reach the top, there was expectation that online courses and e-learning will get some priority in this budget. FM Jaitley has announced INR 100 Crores for virtual classrooms. Online modes of learning is a necessity in India where capacity issues are posing us huge challenges. India is a top participant in popular MOOCs like Coursera, good to see that at the national level the Government is wanting to make a start. Again credentialising the competencies people gain in these virtual classrooms will be important. Perhaps an area where foreign institutions can actively play a role.

Aakash Chauhdry, Director, Aakash Educational Services Ltd
Initiatives in the education sector by the new government seem highly motivating for engineering and medical aspirants in India. The push in the higher education sector and support extended for the middle class income group in the form of avenues and affordable options is encouraging.

The budget is promising as it supports setting up of government medical colleges and establishment of centre of excellence in the form of IITs and AIIMS. Towards its execution, what is vital is a full proof plan bearing right kind of faculty, infrastructure, jobs and market ready curriculum.