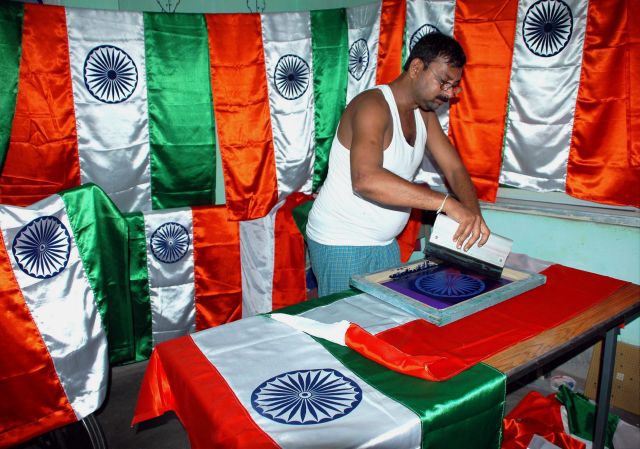 14 August, 2015
Print this article Font size -16+
On Saturday (15 August), Prime Minister Narendra Modi will unfurl the Tricolour from the ramparts of the Red Fort. It will be his second Independence-Day address to the nation. Modi — who knows the multiplier effect of Twitter and Facebook in aggregating public opinion — has called for suggestions on what he should speak on. At present, what he needs to figure out is how to insulate the function of Parliament from the rut of party politics.
With Parliament’s monsoon session ending on Thursday, the hopes of the GST (goods and services tax) rollout by April 2016 are receding. The monsoon session ended predictably, with virtually no work done barring some essential financial business, has resulted in total loss of Rs 260 crore of taxpayer money — Rs 162 crore in the Lok Sabha and Rs 98 crore in the Rajya Sabha.
While economics is playing out well, politics has let down the country. A record low retail inflation and four-month high industrial output, data released on Wednesday (12 August) showed, in a benign confluence that signals a nascent economic turnaround is under way.
Other economic indicators such as higher indirect tax collections and auto sales also suggest a nascent recovery in the economy. Cumulatively, during the first four months of the fiscal year (April-July), indirect tax collections increased by 37.6 per cent over the same period last year.

Chief Economic Adviser Arvind Subramanian has said the increase in indirect tax receipts during April-July period suggests that the underlying momentum in the economy is improving.
In the present scenario, the delay in the passage of the GST Bill indicates that India’s indirect tax system will continue with multi-layered taxes levied by the Union government and state regimes at various stages of the supply chain such as excise duty, octroi, central sales taxes, and value added tax among others.
The Narendra Modi-led National Democratic Alliance (NDA) government’s growth agenda has included reviving the manufacturing sector and increasing its share in GDP from 16 per cent to 25 per cent.  With an emphasis to achieve this objective, the government introduced several initiatives including ‘Make in India’, ‘Skill India’ and ‘Digital India’. A close comparison of the initiatives of the new government and the proposed GST will make it evident that both are aligned and complimentary. The implementation of the GST is essential to make India’s growth story a success. In its absence, the plans of making manufacturing the engine of the Indian economy can be stifled, writes Saloni Roy, senior director, Deloitte India, in The Economic Times.
If neither side budges, it is the nation that will fail to progress. The Centre must address the Congress party’s objections to flaws in the GST Bill, while at the same time the Opposition should agree to reconvening Parliament for a short period to debate and pass the constitutional amendment than to let it suffer the fate of the land bill. Every deadline miss will affect jobs, revenues and investments adversely.
The complete washout of Parliament’s monsoon session puts a big question mark on the NDA government’s ability to push reforms. For instance, after protests stalled its project in Odisha, Korean steel major Posco has moved to Maharashtra. General Motors and iPhone maker Foxconn too have promised to invest in Maharashtra. The message is loud and clear: investment goes where the environment is business friendly.
Tags assigned to this article:
independence day prime minister narendra modi dirty politics good economics
sentifi.com