How Did Your Grandpa Shop 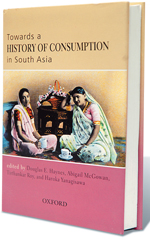 This is an extremely well-researched collection of papers written by a group of research scholars with keen interest in understanding the cultural context of consumption and its impact on societies in South Asia. The detail and depth these papers get into reflect this interest.

Towards A History Of Consumption In South Asia will be of interest to everyone who looks at the consumer in order to better understand how consumption has had an interplay with our society. And these papers resound with examples and explanations that would be thought-provoking for anyone who is interested in this area.
This book is an outgrowth of a conference on consumption in South Asia. The papers may be varied in content and presentation, but they all attempt to put together an understanding of the consumption processes in South Asia, including India, between 1850 and 1950.
Why this period? The authors believe that there is a gap in understanding the patterns and beliefs in consumption during this particular period; in terms of understanding what was being consumed, and why it was being consumed, as well as the impact of this consumption on Indian society itself.
This break was compounded in the 1940s because of the nationalist movement, and in the 1950s by both the need to preserve resources to defend our new republic and the Nehruvian idea of socialism, which frowned at consumption. For that matter, the 1940s saw all forms of consumption as something that should be curtailed. This was partly to check consumption of foreign products — and impact the coloniser — and due to the stress on asceticism and equality.
The authors felt that there was a need to have a connect between the later years — which were well documented and have enough research work being done — the 1940s and the 1950s, when our society was in a flux, and earlier
periods when there was very little work.
Hence, these papers set the tone for documenting how consumption patterns were impacted by the society, and how these patterns, in turn, influenced the society.
The book covers areas where society was influenced by or, in turn, has influenced consumption, and abounds in interesting material on areas such as the role of women in emerging and educated classes, and how they managed to increase their influence by taking charge of family finances, thereby reducing the husbands’ role and increasing their impact on the family and society.
The book also covers areas such as advertising. For instance, one of the papers talks about how advertising for textiles in the 1940s opted to tread a careful path between nationalism and overt lifestyle advertising, even as medicines and tonics faced no such hassles and advertised heavily. Soaps, for example, were seen by the colonials as a symbol of progress and a superior civilisation.
There is more on soaps. When launched by the early forerunners of today’s multinational companies, soaps were given a health tag. For instance, Lifebuoy, an initial proponent of this trend, was positioned as a fighter of germs and diseases rather than as a body-odour remedy used in the home market, as compared to the soaps manufactured by homegrown manufacturers such as Tata and Godrej, which stressed on the ingredients used (no animal fat) and scents (more in line with the Indian ethos).
The book also tracks the conflict between handmade clothes and their machine-made counterparts. It details how thin, machine-made cloth raised religious ire and had edicts raised on whether this new cloth could be used by women. The book also discusses issues regarding the emerging middle class in the early 1900s and how modernity defined this class; and how cinema influenced society in the 1930s and 1940s.
Apart from throwing light on the area discussed, each paper prompts us to think on how these patterns and trends might be shaping our society now. For today’s consumer, consumption is an important area of focus, and consumption patterns change faster and quicker. So, take a look at your grandparents to understand your children? Possibly.
Authors' Details
Douglas E. Haynes is associate professor of history at Dartmouth College in the US. Abigail McGowan is assistant professor of history at the University of Vermont. Tirthankar Roy is reader in economic history at the London School of Economics and Political Science. Haruka Yanagisawa is a professor at Chiba University in Japan.
Badhe is an independent consultant of marketing, service and retail strategy
(This story was published in Businessworld Issue Dated 18-01-2010)
Tags assigned to this article:
magazine book review consumption advertising sanjay badhe oxford tirthankar roy towards a history of consumption in south asia douglas haynes abigail mcgowan haruka yanagisawa south asia