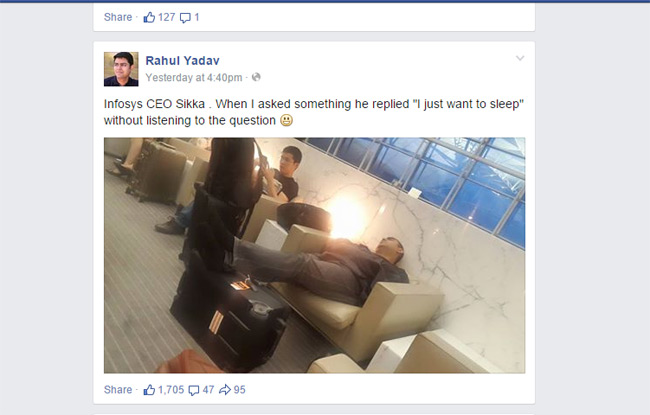 08 June, 2015
Print this article Font size -16+
After taking digs at Zomato and Ola, Housing.com head Rahul Yadav has now taken pot shots at Vishal Sikka by posting a picture of the Infosys CEO sleeping at an airport lounge on social networking site, Facebook.
Along with the picture, Yadav wrote: "Infosys CEO Sikka.
When I asked something he replied 'I just want to sleep' without listening to the question grin :D".
The post has been shared 87 times and liked by over 1,600 people.
The 26-year old CEO is now popular for taking digs at people, most often heads of technology-led businesses.
Recently, he had challenged Bhavish Aggarwal (head of taxi aggregator service Ola) and Zomato's Deepinder Goyal to give away half of their shares to employees.
When asked about his opinion on Deepinder Goyal and Zomato during a Reddit AMA (ask-me-anything) session, he said, "A company scanning menus from last 7 years and doing no innovation. And the CEO says 'Aww. So cute'."
He was also in news for his spat with the investors at Housing.com.
Yadav had reportedly called fellow board members and investors intellectually incapable of any sensible discussion in a resignation letter. Later, he apologised and withdrew his resignation.
Softbank-backed Housing.com was started in 2012 by 12 fellow classmates at IIT-Bombay and is seen as one of the most successful startups in the real estate space.
Apart from the $90-million funding led by Softbank, Housing.com has investors like Helion Venture Partners, Nexus Venture Partners and Qualcomm Ventures on board.