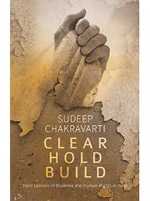 08 November, 2014
Print this article Font size -16+
What a difference three years can make in the life of an industrial hub. As make my way from Jajpur Road to Duburi and the vast and bustling Kalinga Nagar Industrial Complex one morning in February 2013, I see markers that were absent during a previous visit in June 2010. Either that or the markers had escaped me.

The Kalinganagar Academy of Art and Culture beckons me, as do the Royal Hotel Kalinga, Hotel Mirabel, and the intriguingly named Roman Dolipur Hotel & Resorts. The still dingy but better stocked Snako Shoppee, opposite the office of the deputy director of mines, urges me to snack. I see signs on lamp posts for the local branch of the improbably named Mount Litera Zee School, an initiative of the Essel group that runs the Zee television network.

And a huge billboard proclaiming a project for Utkal Builders with visuals of high-rise condominiums and office blocks in Bhubaneswar: ‘The leading Real Estate of Bhubaneswar now in Jajpur.’

Revealing as these visual hooks are, I am quickly drawn to the looming presence of what over the years has made such urban markers possible in these parts: Kalinga Nagar, a sprawling metals processing and manufacturing hub that aims to be the biggest in Odisha. A three-hour drive north-east of the state capital at Bhubaneswar, along relatively well-maintained highways and feeder roads, it has for some years been the pride of Industrial Infrastructure Development Corporation of Orissa (IDCO).

This state-run agency bills itself as a one-stop shop for facilitating industrial activity. ‘IDCO provides assistance in Identification of Project Site, Alienation / acquisition of land on behalf of the project, R&R and Forest Clearance,’ the agency’s website declares, unmindful of the irony that words like ‘alienation’, even used in a legal context, bring to the lexicon of resettlement and rehabilitation—or R&R.

And that is really the story that has brought me to Jajpur district in south-eastern Odisha. The sprawling campus of Mideast Integrated Steels Ltd appears to my right, as does that of Neelachal Ispat Nigam Ltd, a joint venture of Central- and Odisha-government-run companies. Both are among the earliest residents of Kalinga Nagar, a name that draws from the state’s abundant history of empire. The plant of Jindal Stainless Ltd, a more recent address, looms to my left. All have their histories of location, acquisition and angst, but I pass by these for the moment, to keep an appointment with the project held as the holy grail of the Kalinga Nagar complex: Tata Steel Ltd’s six-million tonne-a-year integrated steel plant in the making, spread over nearly 3,500 acres.

After all, not many have the history Tata Steel does in these parts, being the flagship of one of India’s largest and most respected corporate houses; and a globally acknowledged transnational corporation. As I would discover, at least some of that history isn’t anything to write home about.

On 2 January 2006, twelve inhabitants of villages in the Kalinga Nagar area, all tribal folk, died when Odisha’s police shot at them for protesting the building of a boundary wall for the Tata project (a thirteenth died some days later in Delhi; a fourteenth a year later, from injuries sustained during the firing). Nearly forty others were injured. A policeman too died in the fracas when he was attacked by enraged residents.

The incident was the result of an ongoing dispute about the land acquisition process managed by IDCO for the land that it had in turn sold to Tata Steel. Jajpur district’s police and civil administration were represented that day to oversee the process of construction.

At least one publication, State Aggression and Tribal Resistance: A Case of the Police Firing at Kalinga Nagar, published by Indian Social Institute, an influential New Delhi–based organization with strong Jesuit roots, recalled it a year after the incident: ‘On 2nd January 2006, the Collector, Superintendent of Police (SP) and the Tata Steel Company Officials reached the site with six bulldozers and other heavy-duty earth moving equipments. The team was escorted by 12 platoons of police armed with sophisticated weapons.’ The account then claims, ‘Tata Company labourers began to level the ground while “mining staff” spread out and placed … dynamite sticks around the area.’

In this and similar accounts—more like accusations, really—it is unclear as to which agency exactly these ‘mining staff’ belonged to.

That remains a grey area, but it is likely it was an ill-advised attempt to spook protesters that went horribly wrong. The account continues: ‘The villagers were unaware that the detonators of the dynamite sticks were connected to trap strings.’

Trouble was expected as word had gone around the previous dayabout a possible construction of a boundary wall for Tata’s project.

Already, an attempt to construct a boundary wall in May 2005 had been resisted by locals who were fearful of displacement before negotiations were concluded with IDCO and the local administration; these negotiations were being led by Bisthapan Birodhi Jan Manch—people’s platform against displacement. The crowd soon swelled to about five hundred, drawn from several villages in the vicinity.

‘The people in their fear decided to send a delegation to meet the government officials to stop the levelling work,’ I read in State Aggression. ‘The Collector, SP and other officials, however, refused to listen to them.’

Then things get fuzzy; there are several versions as to what happened. When some villagers neared a ditch dug to place the foundation for the wall, goes one such version, they heard a whistle from within the police contingent. Explosions were heard immediately after. Some protestors were grievously hurt. One version mentions a protestor triggering an explosion when a group went to reason with operators of earth-moving equipment to request them to stop work.

One protestor triggered an explosive and had a foot blown off. Angry and panicked, protesters then rushed the police, who fired at them. Some protesters shot arrows and stones at the police and hacked a policeman to death.

Besides showing what human rights activists claimed to be remains of explosives components, it made the startling accusation that doctors attending to the post-mortem hacked off the palms of several of the tribal dead—for reasons that remain unexplained. The Asian Age that May speculated that it might have happened as doctors were keen to hamper the identification of victims as part of an administrative ploy to obfuscate and so diffuse the matter.

Furore expectedly erupted, with politicians and human rights activists of all persuasions descending on Kalinga Nagar, and the six villages that came to be seen as the epicentre of resistance on account of their land having been appropriated for the Tata project: Gobaraghati, Chandia, Nuagaon, Gadapur, Khurunti and Baragadia.

The dead, though, included more villages drawn to resistance—Bamiagotha, Baligotha, Champa Koili and Berhudi—which provides an idea of the concern across the neighbourhood about the project.

Locals blockaded roads in the vicinity for close to a fortnight, bringing Kalinga Nagar to a standstill.