Homes With A High IQ 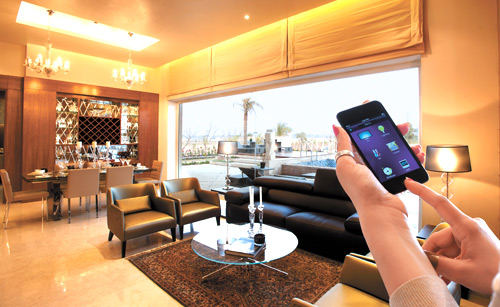 
It does sound like an exciting proposition, and even as you read this, you have probably made up your mind to shift to one of these not-having-to-lift-a-finger houses. But hold on! Most of these projects are still under construction and you will have to wait a while.

"Complete home automation is a new concept in India, though it is common in places such as Singapore or South Korea. We can expect the shift to automated homes in around three years, when the projects will start getting complete," says Simiran Bogra, vice president (sales and marketing) of Puri Constructions, which is building an automation-equipped project near the Dwarka Expressway in New Delhi.

But if you are in a hurry, there is always an option to get your current home automated. There are several vendors such as Pune-based Vasu Infosec and Delhi-based Smartbus Automation (HDL) that will ensure your air conditioner switches on half an hour before you reach home, the TV is set to your favourite channel, or the lights come on the minute you walk in. Others such as global biggies Lutron, Schneider, AMX and Creston also offer similar services. The costs vary depending upon the size of the home and the extent of the automation. For instance, a 2-BHK (bedroom, hall and kitchen) house with mood lighting and remote control of fan and air conditioner will cost around Rs 1.5 lakh, while a 4-BHK house, where everything from curtains to music is cellphone controlled, will cost anywhere from Rs 4 to 6 lakh depending on the developer.

As the technology spreads to more toys, the home automation hub will evolve into a burgeoning market. "Earlier, modular kitchens were a rarity, but are now a trend. Marble flooring, too, was an exception, but has now become a standard in houses. The same way, home automation is a concept that developers have to adopt to survive competition," says Sanjay Sareen, director of Smartbus, which provides automation technology and equipments to real estate developers including Delhi-based Puri Constructions and Hyderabad-based Janapriya Syndicate Engineering.

But before you are sold a property with home automation as its USP, verify the credentials of the technology partner. For if a remote-controlled home can make your life convenient, a faulty one can make your life equally miserable. Imagine being locked out of your home because of a failure in the security system. Go for a de-centralised system — in case of a snag, only one room's automation takes a hit, unlike a centralised system where all gadgets in the house can go awry.

Not only does an automated home make your life more convenient, but it also allows you to do your bit for the environment. The added technology will only make it greener. You can program the lights to turn on or get brighter only when people are in the room. The temperature and lighting can be controlled remotely allowing you to save energy when you're not at home. Controllable blinds and shades can let sunlight in or block it off, depending on the time of day or year. Thus the electricity usage can be cut down by up to 25 per cent, says Sareen. Of course, you can do this on your own if you are a bit more vigilant and switch off the lights as you leave a room. But it is the convenience factor that makes home automation a sure winner.

Home automation has its share of critics, too. As they say, a house where you don't need to move around, but press a few buttons to get things done could make a host of couch potatoes. They are right, but do you mind?