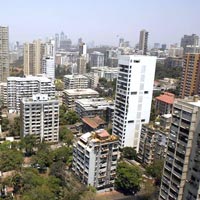 08 November, 2014
Print this article Font size -16+
For housing realty in Mumbai, it is bad news again with the property broking house Knight Frank reporting that demand within the Mumbai Metropolitan Region (MMR) had dropped by a whopping 25 per cent in the first half of calendar 2014 in comparison with the same period last year. The unsold inventory will take almost three years to sell.

"Buyers continued to sit on the fence for the most part of H1 2014 in anticipation that the new and stable leadership at the Centre would revive the ailing economy," the report said.

The half yearly report of Knight Frank called 'India Real Estate Outlook' released on 26 August, however sees an uptick in the Mumbai market with four important transit infrastructure projects coming up in Mumbai including the commissioning of the Metro Rail, the part-opening of a monorail system and the Eastern Freeway. "These may redefine the property market dynamics of the entire metropolitan region," the report said. Although 2014 would witness a decline of 15 percent in new launches to 92,845 housing units, it would be a trend reversal year for absorption, which will increase by 8% to 80,022 units.

The office segment too has been slow with the absorption at 2.5 million square feet, a decline of 34 percent in the first half of the year, as compared to H1 of 2014. "Owing to the general elections, corporates adopted a noncommittal attitude towards taking up office space during the first half." With developers deferring fresh launches to adjust to the changed market conditions, new project completions dropped by 25 percent in H1 2014 in comparison with the same period last year.
On an all-India basis though, the report is bullish about future prospects. Mumbai and Bangalore are expected to lead the recovery in sales volume, with 49 percent and 26 percent growth, respectively from H2 2013 to H2 2014. The election results and incentives announced for the housing sector in the Union Budget have improved home buyer sentiments in the last three months.

However, Knight Frank's own data showed that the recessionary conditions were continuing with as the number of new launches showed a subdued growth of 5 per cent in the next 6 months owing to high unsold inventory and poor response to new launches.

Some cities however bucked the trend and had shown quick price appreciation. Bangalore appreciated at the fastest pace of 11 per cent in H1 2014 compared to H1 2013. This was followed by Hyderabad, at 9 per cent during the same period.
Tags assigned to this article:
more 4 gurbir singh real estate mumbai web exclusive mumbai monorail knight frank mmr housing realty india real estate outlook mumbai metro rail