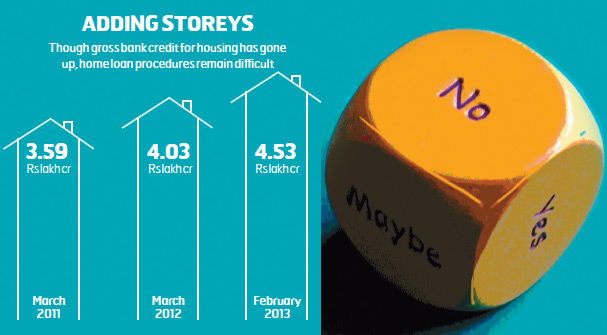 Nobody gets a perfect score; but customers with scores over 700 are considered good for home loans. On the downside, a score below 600 could prevent you from getting a home loan. Be conscious of your credit card usage during the months preceding the home loan application. Rash purchases might indicate ‘irresponsible spending’, which could impact loan eligibility.

Limited by age: The one number that works when lower is age. Borrowers older than 50 are generally not given a home loan as most banks consider 58 to be the age of retirement from active service. So, if you are looking for a long-term loan — say, 20 years — you should be under 40. The ideal age to take a home loan is 30-35 years. Those above 40 do get loans, but their eligibility is lowered, and they need to show higher earnings.
Location matters: If you are looking to buy property in certain areas in and around Najafgarh, Chhattarpur and Ashok Nagar (Delhi) or Mahim East, Nallasopara, Khar East, Mumbra or Chinchpokli in Mumbai or Vivek Nagar, Tanny Road and Gauri Palaya in Bangalore, your loan request could be rejected. Areas that have a ‘bad’ reputation or have high default rates are hot-listed as ‘out of geographical limits’. These places go off the negative list only when the overall credit repayment profile of the area improves.
Banks are also not comfortable with places that have loose soil texture or are prone to landslides and earthquakes. Properties constructed on forest land will not get loans.
Lenders are not very keen to give loans against old, dilapidated structures. Banks lend only 65-70 per cent of the property value if the building’s ‘structural age’ is more than 15 years. If it is more than 25, the loan may even be rejected.
“Buildings that are 10-15 years old are considered for loans by most banks; but loans for older buildings will only be given after proper structural checks,” says Sundararajan of Shriram City Union Finance.
Builder’s history: Banks also do not lend against property (or buildings) constructed by builders with a dubious track record. “Home buyers should check the credentials of the builder before applying for a loan. Banks also look at structural plans, quality of construction, title documents and property valuation before disbursing loans,” says Sundararajan.
Loan load: Banks lower eligibility of customers who have pre-existing personal loans. So, if a person is repaying a personal loan equated monthly instalment (EMI) of Rs 15,000 at 16.5 per cent per annum (at the time of applying for a home loan), his eligibility will come down by about Rs 14 lakh. Conservative banks lower loan eligibility by almost a lakh for every Rs 1,000 paid as EMI.
Loan applicants can, however, negotiate with bankers for resetting eligibility limits.
Lenders also try to find out whether the borrower has stood guarantee for a loan taken by someone else because the guarantor is liable to repay the loan if the borrower defaults. So, the more loans you stand guarantee for, the lower your eligibility for a home loan.
Crime doesn’t pay: Borrowers with criminal records are not usually entertained by banks. Though banks do not conduct direct police verification, they will not take any ‘history of crime or criminal activity’ lightly.
“Individuals looking to buy a house should plan their funding options well. They should have some decent savings to meet initial payments,” says Singh of Policy Bazaar.
“Try to get pre-approved home loans; this will give you a fair idea of your loan eligibility. Go for bank-approved properties; doing so will reduce payment hassles. And, more importantly, be a good (bank) customer; it always helps,” he advises.
Happy house hunting!
shailesh(dot)menon(at)abp(dot)in
alertsmenon(at)gmail(dot)com
Twitter: (at)alertsmenon