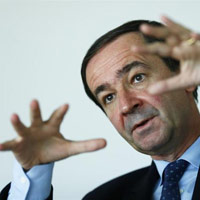 08 November, 2014
Print this article Font size -16+
Holcim, the world's largest cement maker, is cautiously optimistic about the outlook for its biggest market, India, saying demand could pick up thanks to government spending on infrastructure ahead of an election.

About 17 pe rcent of Holcim's sales were in India last year, but a record current account deficit and a steep fiscal shortfall have curbed the amount India has spent on building.

That, along with weaker-than-expected demand in other markets like Mexico, Morocco and Canada, prompted Holcim to rein in its 2013 profit forecast in August.

"There are some positive signs coming from India," said chief executive Bernard Fontana in an interview with Reuters late on Monday, citing studies in India showing that infrastructure demand tended to increase by 15 percent in the run up to an election.

The end of the monsoon season should also help, Fontana said, though he cautioned it was still early days in terms of returning demand.

India is due to hold its largest-ever general election within eight months. The government has approved infrastructure projects worth 1.83 trillion rupees, to revive economic growth and shore up investor confidence.

India's economy is expected to grow at just 5.3 per cent this fiscal year, its slowest pace of expansion in a decade. But Fontana was sanguine about the outlook for the country which has a population of 1.2 billion.

"Even with 5 per cent GDP growth, you can have significant growth of cement. We believe that the need will be higher to meet the demands of the population," he said.

He noted that India's cement consumption per capita is roughly 85 kilograms compared to the worldwide average of 480 kg. In China, consumption is close to 1,500 kg.

Holcim, whose main market in India is rural housing, has used the construction slowdown to speed up cost-cutting in energy and logistics there, Fontana said. Its Indian group companies are targeting a cost per tonne at the same level as 2011, despite high inflation.

Falling Rupee
A tumbling rupee, which has lost around 14 percent of its value so far this year, has added another headwind for Holcim. A 5 percent fall in the rupee's value in the first half wiped 19 million francs off operating EBITDA.

But Fontana said market dynamics had a bigger impact than foreign exchange fluctuations.

As a natural hedge against a weaker rupee, Holcim has gained ownership of a coal block in central India, allowing it to source a significant part of its coal requirements in rupees.

Since taking over as CEO at Holcim, Fontana has closed plants, reduced logistics and procurement costs and pushed higher-margin services with the aim of boosting operating profit by at least 1.5 billion Swiss francs by the end of 2014.

He aims to add up to 700 million francs to profit this year and said he was confident that Holcim could deliver on this target after achieving an increase of 376 million in the first half.

Global cement makers, like Holcim and rivals Lafarge and Cemex are shedding non-core assets and lowering energy costs to counter a widespread construction downturn that has hit profit and return on invested capital.

Fontana said Holcim could make selective divestments in markets where it did not have a strong presence - though he gave no further details. The company recently swapped and combined some of its European assets with rival Cemex in an effort to achieve cost savings.

In terms of broader demand, Fontana said he saw some signs of a stabilisation in Europe. He was more upbeat for the United States where he said volumes had the potential to increase to more than 100 million tonnes in coming years.