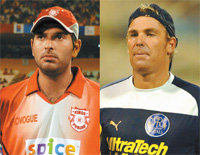 08 November, 2014
Print this article Font size -16+
Early this week, the Board of Control for Cricket in India (BCCI) took down the stumps of two Indian Premier League (IPL) teams, Kings XI Punjab and Rajasthan Royals. In a decision without precedent, BCCI terminated the franchisee agreement with the team owners, reportedly citing lack of transparency in shareholding patterns.

Many see the expulsion as a politically motivated decision to get even with former IPL commissioner Lalit Modi, who played godparent to both teams and is being investigated by the enforcement directorate. Others view the expulsion in the light of the player auctions in November for the fourth season of the IPL. The players of these two teams will be easy pickings for the remaining seven teams (eight, if new entrant Kochi gets its act together) in the fray. With some players of these teams already expressing doubts over being paid their dues for the IPL's previous season, the talent might be waiting to be poached.

In all this off-the-field action, the question that is loud, clear but unanswered surrounds the fundamental role of a cricket board. Is BCCI an administrator and investigator or a regulator with a skin in the game? There was a time when cricket required a simple administrator and its governing boards were largely involved in framing terms and conditions for the game, selection of players, ensuring players followed disciplinary codes, upkeep of playing facilities, and searching for sponsors and ticket sales.

Then, telecast rights and the big bucks changed the complexion of the game. What started with charges of ball tampering and doping by players went on to entire matches getting fixed according to the whims of betting syndicates. Soon, the role of boards like BCCI — the richest cricket board in the world — was far more complex than it bargained for. That did not stop BCCI from taking on more complex role like organising IPL — a heady cocktail of glamour, business, underhand dealings and politics.

With top businesses from India and NRIs picking up equity stakes — as opposed to advertising slots — BCCI was no longer the governing body that sets the rules, but also one with a different skin in the game. A skin that would not go with the nature of what BCCI was meant to be. Many had begun seeing that the regulator had clearly put its own wickets at risk.

The board was soon grappling with issues like foreign investments and the source of capital entering its teams, an issue that got the government to begin sniffing at the money trail. For businessmen, this was not unfamiliar territory as a bulk of India's foreign investments come from tax havens such as Mauritius. But for BCCI, that was by now both an umpire and a batsman at the same time, it was a meek admission that ‘Brand Cricket is Caught in an Imbroglio'. That BCCI has filed an FIR against Modi and other business associates involved in IPL this week also demonstrates that BCCI wants to clean the mess and emphasise its willingness to play tough. At present, the board is hell-bent on proving that Modi and his allies are the villains on the cricket field. But like any other case of a failure of governance, it is the entire board and not one individual that is to be held responsible. By doing away with two of its teams, BCCI probably threw away the babies, but retained the bathwater.