His World Of Intrigue 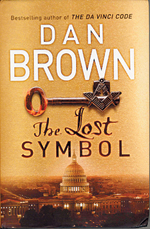 It's difficult to remember when a work of adult fiction generated this much interest, months ahead of its launch. Dan Brown has taken six long years to write The Lost Symbol (Bantam Press), after the blockbuster, The Da Vinci Code.

In this new story, Brown's two-book protagonist, Robert Langdon, is invited to lecture in Washington's Capitol Building, and shortly after he arrives, something very disturbing is discovered. Langdon deciphers the object: an ancient invitation that beckons its recipient towards a world of intriguing beliefs. When his mentor, 58-year-old historian, scientist and philanthropist Peter Solomon, is kidnapped, Langdon figures that accepting the unusual invitation could be the only way to save Solomon's life. (How come we never heard of him before, considering Brown equates him to Langdon's dearly loved father-figure?)

Langdon has a great deal of problem-solving and symbol-unravelling to do. And this time, with his formula down to the last full stop, Brown delivers another cracker of a book. Washington DC becomes the unlikely setting for impossible puzzles, high drama and dreadful situations. Brown gets even more ambitious here — the timeline of the entire story is crunched into 12 packed hours. Yet, for all its substantive-appearing size, the book is gone in a puff.