His Day Has Come 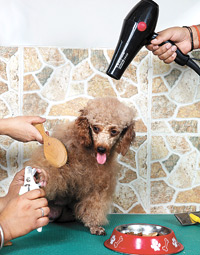 
Mumbai resident Ranbir Singh, a lawyer by profession, is a doting dog owner. His dog Rio, a Labrador, has it made: a monthly visit to a dog salon, an active social life, and the best kinds of food (all of which sets Singh back about
Rs 3,000-4,000 a month).

Dipankar Das, a senior manager at Hewlett-Packard, owns a Chinese pug named Brutus. This 31-year-old Bangalore resident prefers to walk his dog twice a day (amongst mothers and maids pushing babies in prams) by himself. Of course, the convenience of working from home that his company's rules allow is a big help. And like any child, Brutus has his regular visits to the veterinarian, his diet and his personal care needs all taken care of.

It seems to be the hallmark of emerging urban India; pets – especially dogs – are becoming the new rage. Two years ago, the commercial for mobile services provider Vodafone starring a pug inspired a number of people to go out and pay a few lakhs to acquire one. At the very least, there's a cottage industry springing up around pets.

Heavy Petting
"Pet stores have mushroomed in the last three years," says Subir Saxena, a retired oil company executive, while walking Bruno, his 15-year-old German Shepherd, on Carter Road in the suburb of Bandra in Mumbai. "They stock a huge range of products, from special food for Labradors to footwear for lapdogs."

Hewlett-Packard's Das feeds his dog with Eukanuba, a premium food brand by Procter & Gamble that is considered to be the best by most pet retailers and vets. "We love Brutus like he was our kid. We pamper him with treats, take him for monthly medical visits," says Das, adding that each visit costs Rs 1,500.

Food constitutes about 70-80 per cent of the overall industry, as people have started paying considerably more attention towards the health of their pets. The market is full of a variety of food product brands (imported and domestic) such as Eukanuba, Royal Canin, Hill's Science Plan, Pedigree, Nutripet and Drools. Prices range from Rs 350 to Rs 1,200 per kg.

In some ways, the behaviour of dog owners reflects general economic characteristics; just as rising incomes reduce the proportion of household spending on food, well-to-do dog owners are spending more of the family dog's annual budget on personal care (grooming) and healthcare (the regular medical check-up).


Personal care includes grooming products and accessories, right from hairbrushes, shampoo and powders to toys, harnesses, round collars, and treats like chewy sticks, biscuits, burgers and other goodies. Services include salons and grooming parlours for pets and even dog-walkers. The emerging pet economy is doing something else: it's making entrepreneurs out of some ordinary animal lovers, too.

Take Victor D'Lima, who has spent most of his working life as a telecom industry executive. He quit his lucrative job to open a pet retail store: Pet Story. He and his wife Kay, both in their 30s, have two dogs of their own, one cat, one bird and two tortoises in their house.

Now, they own two stores, one each on Peddar Road and Bandra's Pali Naka in Mumbai, and are looking at expanding to other cities. He gets 50 walk-in clients a day; on weekends that number can go up to 150-200. His experience is an indicator of the growing retail spends on pets. "Earlier, dog owners spent most of their money on medical visits – usually emergencies – and then food (which earlier was what the family had at home, usually)," he says. "Of late though, spending on grooming and food has increased, and among my clientele at least, accounts for 35 per cent of spending."
break-page-break
In the absence of formal and frequent market research, D'Lima does his own, reading up about dog breeds and visiting places where he can gather the necessary information. "You can start a business related to pets only if you love them," he says. "Look at the cultural changes that have led to the growth in families owning pets."

In Delhi, 39-year-old Sanjeev Kumar quit a cushy job with HDFC Bank to start Scooby Scrub in 2005. Kumar with his wife operates about seven branches of the pet salon in the Delhi-NCR region. They also have franchise operations in Jaipur, Hyderabad and Pune. By next month, they plan to open branches in Goa and Shillong.

The horizons for the pet economy go beyond food; apart from services like dog-walking, another element that is gaining ground is kennelling — a fancy way of thinking about dog-sitting when the owners are out of town.

There have always been a few around, courtesy the old-fashioned kennel clubs that many dog owners have been members of, but now it is becoming a well organised third-party service. Like the work of Party Barky Hai, a dog event management firm that caters to entertaining dogs and helps them ‘network' socially. And like the social networks that we humans are familiar with, this is also an entrepreneurial venture.

Pet Shop Boys (and Girls)
Party Barky Hai was launched in Mumbai by two friends, Shivani Mathur and Ragini Parmar, who call themselves "canine entertainment specialists"; both claim to be certified ‘canine behaviourists'; anyone who loves dogs can do a month-long course conducted by Canines Can Care in Mumbai to get that certification.

Their love for dogs brought them together. Mathur has a bulldog called Dr Watson and Parmar a Lab called Miso. "We did a small survey and found that people with pets wanted some sort of activity to engage in," says Mathur.

They started with one event per month and say they now hold one a week and plan to expand to nine major cities in the next eight months. "Like human beings, dogs need to socialise, too," says Parmar. "So we have all type of fun games for the dogs, and we train them (and their owners)." It is a day-long outing; the duo charge about Rs 1,500 per pet for an event which attracts around 50-60 pets.

Any industry worth the name has to generate employment, even gainful employment, or calling it an industry would just be fanciful. Kannagi Shanbaug, a professional groomer, works part-time at Happy Tails, a pet grooming salon in Bandra in Mumbai that averages 65 ‘clients' a day. She says she earns around Rs 15,000-20,000 a month through her personal practice.

Is the pet economy here to stay? The love of pets, says Mathur of Party Barky Hai, will spark ideas for pet-friendly restaurants, dog resorts, pet bakeries, etc. "People are just gaga over their pets," she adds, believing that things can only get bigger (if not better). And therein lies the greatest hope for all who build a business around pets, best captured in the aphorism of a dog lover: "If dogs don't go to heaven, I want to go where they go". You can't beat that.

With inputs from Shrutika Verma