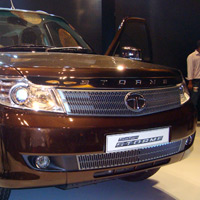 08 November, 2014
Print this article Font size -16+
The 3 per cent additional excise duty imposed on SUVs/MUVs has brought the gravity-defying growth of the SUV/MUV market to a grinding halt. This is the first evidence that the fast-growing segment of the Indian auto market has also been engulfed by the slowdown.

Between April and May this year, the SUV segment grew at an average of just 4.08 per cent to register sales of 82,893 units, vis-a-vis, 53.91 per cent growth in the same period last year.

The SUV segment in India consists of models like Maruti Suzuki’s Ertiga, Renault’s Duster, M&M’s Scorpio, Bolero, XUV500, Quanto and Xylo, and Toyota’s Innova among others. In the more premium part of the market, fall models like Toyota’s Fortuner and Mitsubishi’s Pajero, beside the Q-Series offerings from Audi and the X-Series offering from BMW.

Moreover, even month on month, the segment has faced sharp decline due to the hike in excise duty that made SUVs/MPVs much more costly. For example, till March till 2013, the segment was growing at 54.46 per cent at an average sale of 4,99,794 units.

“We had predicted this when the government had levied the additional tax on SUVs in the budget. Anyways the sector overall isn’t doing too well. Taxing the only segment that was growing rapidly has put additional burden on the auto industry,” says Vishnu Mathur, director-general, Society of Indian Automobile Manufacturers (Siam).

Overall passenger car sales fell 8.56 per cent at 4,09,823 units in April-May this year. Commercial vehicles continued their bad run as well and fell 12.11 per cent at 37,129 units vis-a-vis 42,247 units in the same period last fiscal. Even light commercial vehicles that were doing brisk business last year fell this month to register sales of just 75,007 units, a decline of 1.36 per cent.

“It’s not just a question of interest rates. The overall sentiment in the economy continues to be gloomy. When people aren’t sure about whether or not they would have a job next year, it is natural that they curb discretionary spends like a car. We see no recovery in the immediate future,” says Mathur.