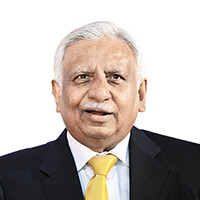 22 January, 2015
Print this article Font size -16+
High Stakes
It’s either a big risk or Naresh Goyal is super confident. The Jet Airways promoter issued an underwriting to Punjab National Bank (PNB) that he would not dilute his stake in the carrier below 51 per cent (worth Rs 2,600 crore). Earlier, it was reported that he had pledged all his shares to PNB. Airline analysts say an undertaking isn’t technically a pledge, yet the implication is the same: a banker is seeking shares as collateral to lend money.

Starting Over At 79
Forty movies and a career spanning half a century later, Woody Allen will write and direct his first TV series for Amazon’s video-on-demand service at 79. Amazon Prime, which scored a Golden Globes double with Transparent, turned to the prolific filmmaker to steal a march over online rivals such as House of Cards maker Netflix. Allen, on his part, joked: “I don’t know how I got into this... My guess is that Roy Price (Amazon Studios vice-president) will regret this.”
Cut Short
Avinash Chander, chief of the Defence Research and Development Organisation, was sacked 15 months before his term was to end. Though no official reason was given for the move, sources said Prime Minister Narendra Modi was unhappy with the delay in key defence projects handled by the agency. Defence minister Manohar Parrikar said the sacking took place on his recommendation, and added that a young person should take over. Chander, the architect of the Agni missile, said he was at a loss as to why he had been removed.

Best Foot Forward
Real Madrid forward Cristiano Ronaldo won his second consecutive and third in all Ballon d’Or, the Fifa award for world’s best footballer, beating Barcelona striker Lionel Messi into second again. A frustrating World Cup outing with Portugal was the only blip in a year that saw him lead Real Madrid to its 10th Champions League title apart from the Copa del Rey, European Super Cup and Club World Cup. CR7, as the 29-year-old is popularly known, scored a total of 61 goals at an average of 1.02 goals per match in 2014. He ranked second on Forbes’s list of the world’s highest paid athletes, with earnings of $80 million.
In The Balance
The trial of Ross Ulbricht, alleged operator of the Silk Road criminal-trafficking website, began with prosecutors calling him a mastermind and the defence portraying him as the fall guy set up by the real culprits. His lawyers say he gave up control of the site by the time he was arrested. If proved that Ulbricht, 30, ran the online bazaar under the pseudonym Dread Pirate Roberts, he could be jailed for life.

Bitter Half
Sue Ann Arnal encashed the $975 million cheque she got from the divorce settlement case against her ex-husband and oil magnate Harold Hamm. Now, she is back for more. Arnal has appealed the case in the Oklahoma Supreme Court, claiming that the earlier ruling let Hamm keep the vast majority of a marital estate worth up to $18 billion. In November 2014, a court ordered the Continental Resources CEO to pay her about $1 billion in cash and assets when the couple parted after 26 years of marriage.
Change At The Top
Tarun Rai has been appointed CEO of advertising agency J. Walter Thompson South Asia to succeed Colyvn Harris. Harris, 57, who has been with the firm for 35 years, will be executive director, global growth and client development. Rai, 51, joins JWT from Worldwide Media where he was CEO since 2008. Rai’s previous tenure with JWT ended in 2008.